for the first time in months
[well, since his first seizure in February to be exact]
our big boy slept in his own room last night
in his new big boy digs!
we decided to give him our old [queen sized] bed
and add some new furniture
to give him more of a 'big boy' room!
as it was all coming together, i kept telling him that this was HIS room!
so, last night was the big night. 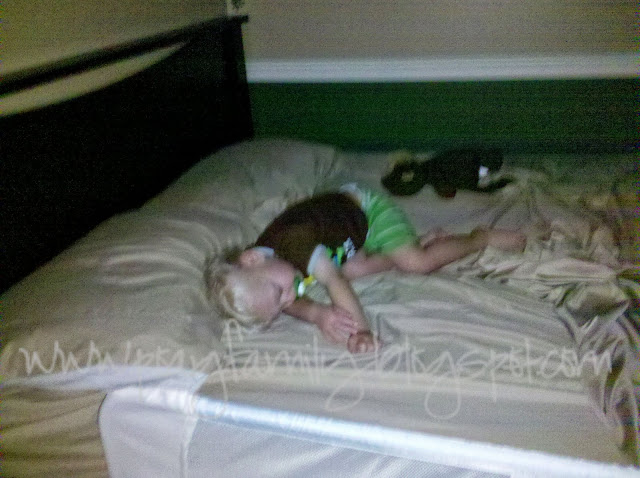 we all three went into his room last night around 8:30
we got him dressed in his PJ's and told him to pick some books from his [new] book case!
he picked about four and brought them to me to read.
we 'read' them
[kullen likes to close the book after a new pages and say 'all done!']
after we were done with the last book, i told him it was time to go to sleep
and turned off his light.
he, of course, was not happy and kept pointing towards the door
[pretty sure he wanted to go in my bed]
but we just kept telling him that we were sleeping in HIS room tonight!
finally, he settled and laid in between us - still rambling a bit
then he crawled over me so he was next to the bed rail and curled into my neck and fell asleep!
adam snuck out of the room and i followed a few minutes later!
it only took an hour, start to finish!
he slept straight until around 2:30
when i heard him say 'mamaaaa?' and begin to wimper.
i went in his room and laid down with him again, he immediately went back to sleep!
i, again, snuck out but was awoken again about 3:30ish.
i was so tired but luckily remembered to grab my phone [aka alarm clock]
and the next thing i knew, it was 5am and time for me to get up.
i left him sleeping and went to get ready for work!
i know some of you are probably thinking
'this girl is crazy!'
BUT
this is progress for us!
it wasn't easy for any of us really
we i still have a fear of SIDS or seizures
but i know with rhys coming SOON that mr. kullen needs to be in his own room
so he isn't awoken by a crying newborn
and then i'm not struggling to get two kids back to sleep! 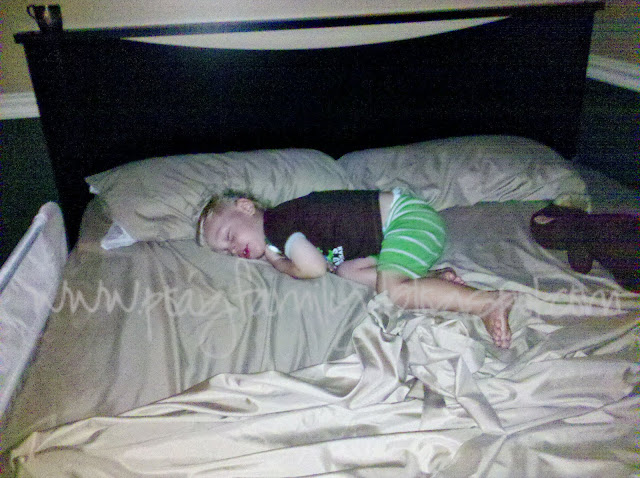 i am hoping that it continues to get better from here!
we have the fish tank in his room
just need to add water and then fish - and i think that will be nice for him to have
we're also contemplating putting a small TV on his dresser
so he can watch a movie before bed/falling asleep.
he has gotten so used to falling asleep in our bed, while watching TV
part of me thinks it will help him get over the fear of being alone.
parents? whatcha think?
is a tv for a 2yr old not a good idea?
i'd love some opinions! 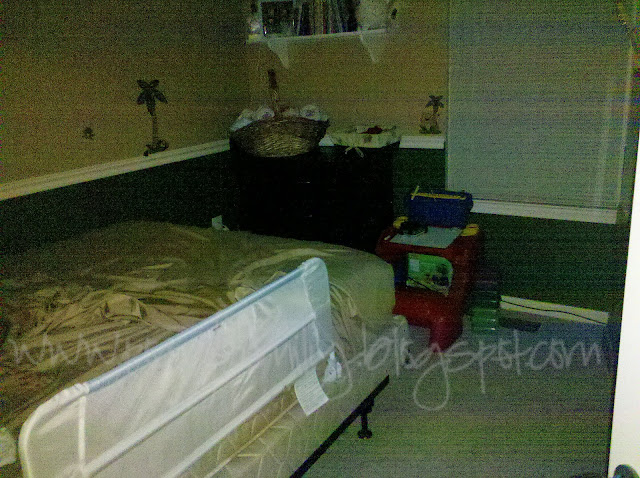 just a little 'sneak peek' of kullen's room
i still have some finishing touches so won't be posting a REAL post
[with good quality pictures]
until they're all finished!

How cute! Kudos for progress! Hi! Just stopping by. Following you from Follow Me Back Tuesday Blog Hop. Would love a visit and a follow back on my blog: http://blog.writerslairbooks.com. Thanks! By the way, we have a current giveaway for an IPAD 2 and a Kindle 3G. I would love for you to enter if you haven’t already!

YAY big boy Kullen!!! I think the TV is a good idea- Cheyenne won't sleep without on after sleeping in my room. Thats why if she isn't in my room she sleeps in Kenzie's. I hope it keeps getting easier for ya!

We did the tv thing with Jr too. Although I am going to try and not do that with Chloe. Because now Jr stays up LATE watching it cus it keeps him up. & is always coming in asking for a midnight snack ; )

I think your doing a great job making the change and it was only night one, he will get use to it : )