i have so much to catch up on - kullens sleep situation, 4th of july, and 365 project just to name a few! i swear, i'll catch up eventually ;)

so - lets start with kullen-man and his sleep! things are going GREAT! :D we left off on friday, where we had a pretty successful night [thanks to hub] and i'm not sure if i mentioned it but i was a little worried about the weekend because i knew we'd be going away for at least ONE night and i know how routines can get thrown off when going on 'vacation'. well - friday was fine - put him in his crib and he stayed there, but did wake up. on saturday, we woke up around 7am and had to go wake mr. man up! :) we ventured down to our friend joey's lake house for a 4th of july pig roast and as soon as we got there adam realized he left the pack and play in HIS car. you've gotttttta be kidding me! luckily - joey's parents had an extra one so we were saved!!! - of course, things did get thrown off a tad ... kullen would not go to sleep on his own -- well, he probably WOULD but if i would have left him there - but instead, i laid on the bed with him while he drank his bottle and the next thing i knew - i woke up and it was dark! haha! he woke up that night around 4am and i had a hard time getting him back to sleep but eventually did. we spend all day sunday at joey's as well ... kullen took a nap in his pack and play after swimming and lunch and i was able to catch some rays while mostly everyone was out on the boat! we had a huge crab feast - where kullen tried his first crab - and loved it! :) after cleaning up and packing our stuff - we decided to head back home. of course kullen slept the whole way home (which was about an hour and a half) so i was worried how our night would go. once we got home, we gave him a bath and did our normal nighttime routine of milk and story before putting him in his crib. once i put him there, i don't think he made a peep. i woke up the next morning around 8 and went into his room (paranoid mom!) to find my little man just starting to wake up! he had slept in his bed ALL night without waking up ONCE!!! i was so proud of him!! :) so, monday night and last night were just as good ... we did our nighttime routine and put him in his crib - of course he cried some but was asleep within 10 minutes. both monday and tuesday night - he did wake up between 12:30-1:00am but i just went in and laid him back down, rubbing his back and he was back to sleep almost immediately. :D i didn't realize how happy having this whole routine would make me ... it's nice to not have to fight him to go to sleep, or lay with him while he tosses and turns. i can lay him down and then still have an hour or two of 'me' time to get some things done - or just be completely lazy and catch up on tv (which is what i have been doing!)
but, all in all - we had a good fourth of july. sadly - we didn't see a single firework though :( well, honestly, i'm not too upset about it - i know next year kullen will probably be begging to see them - so this year was us taking advantage of NOT having to do the whole firework fiasco ;) the time at joey's was a blast and we look forward to doing it again soon!
i wish i had more pictures from the weekend but unfortunately, my camera was on it's last leg so i didn't get nearly as many as i wanted too =( 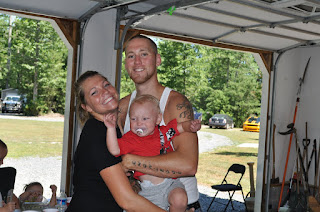 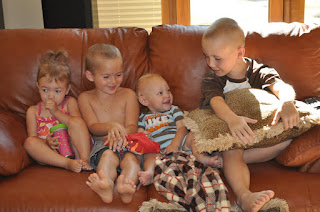 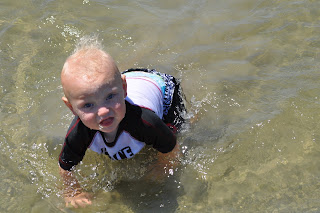 monday we went to the pool with my mom and sister! 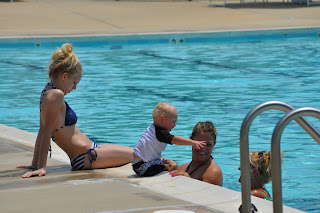 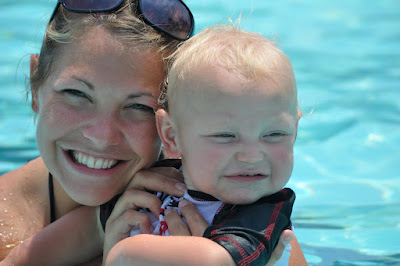 also - i guess i should clarify something i mentioned in my last post. it's true - adam and i are trying for our second baby. :) i am not broadcasting this all over, but consider it a special treat for my blog readers ;) so pleaseeee - if we're facebook friends, don't mention anything on there - i don't want EVERYONE knowing just yet because i, of course, have the fear of infertility. that was definitely something i hated last go round ... once people knew that i was trying, it was all they asked about. and everytime i had to tell them 'not yet' i felt like a total failure - SO - until there is a bun in the oven, i won't be talking much about it (that's the plan anyway)
but yes - i have been off my pill for a few months but we haven't actually been 'trying' - last month we were ... uh, not careful, but i didn't go to any extremes of 'trying' so when i got my period this month - i was not surprised. disappointed, absolutely, but not surprised.
so while we were at joey's over the weekend - adam and i were chatting about something and he just came out and said that he was disappointed that i wasn't pregnant. so, i preceed to slap his arm and ask him why the heck he didn't tell me that he was READY! he said 'of course i'm ready ... why else would i be okay with no birth control' HAHAHA :) so, i asked him if we could REALLY try this month and he said absolutely - so that's the plan. i consider this month one of trying! so, stay tuned - my bloggers will be the first to know :)

and, in last post, i mentioned the fears of having another baby - and they are still something that i will battle with but when me and adam had kullen, we said we wanted our kids to be 2 years apart so we are infact sticking to our original plan. if i were to get pregnant this month, baby #2 would be born in april - and kullen would be turning two that june!
and i have heard some people say they'd rather get one potty trained and past terrible twos before even thinking of having another but i think i'm total opposite with that. i don't want to get used to kullen being potty trained and doing everything on his own - and then be thrown for a loop when i newborn comes. we'll see how this goes over when i actually DO have a newborn and 2 year old ;)

so, thats pretty much all that's going on over in the poag world :) kullen is walking more and more - but crawling is still his main mode of transport :) he walked from the bathroom into the hallway yesterday - so cute! he walks like frankenstein - with his arms out in front of him!! haha i can't help but laugh!
i wonder what kullen would say about mommy and daddy having another baby?! ;]

Congrats on trying for baby 2, very exciting. Kullen will have fun being a big brother. I know my oldest Alex had so much fun when his little brother Joey was born :)
Good luck!
Sarah

Aww I will be praying for baby #2 :) And I'm the same way. My sister and & I are almost 2 years apart and I've always wanted my kids to be close in age too. With that being said, I had Leah at a young age so THAT wasn't going to happen for me, ha! But I will be that way with my next 2 kids! Keep us updated on baby #2!