i can't believe a month has gone by already!
i spend as much time as i can just snuggling with him,
sniffing that baby smell [and yes, breath too!],
kissing his face and touching his skin
that the hours feel like minutes and before i know it
an entire day is gone. 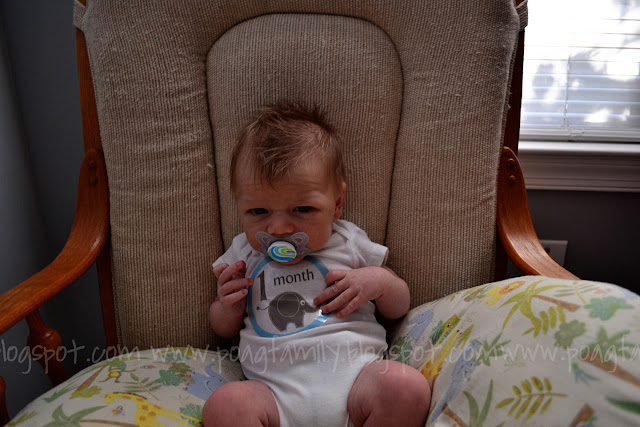 days and weeks have flown by
and now my little bubba is an entire month old!

this first month has been spectacular!
i have been blessed with an amazing baby!
the only time he fusses/cries is when he is hungry
or needs his butt changed!
every now and then he'll fuss to be held
but hey, what's wrong with that!
every baby just needs some lovin once in a while! 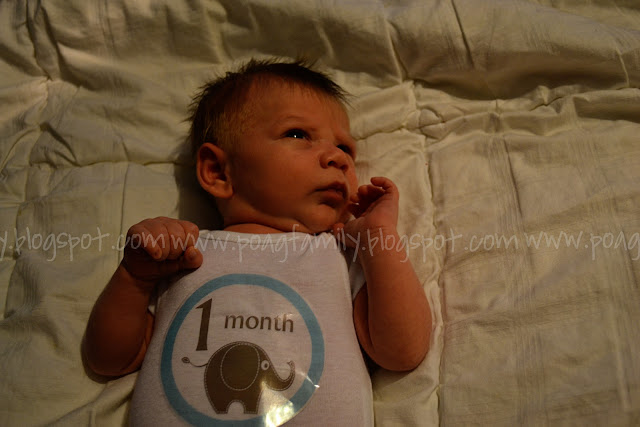 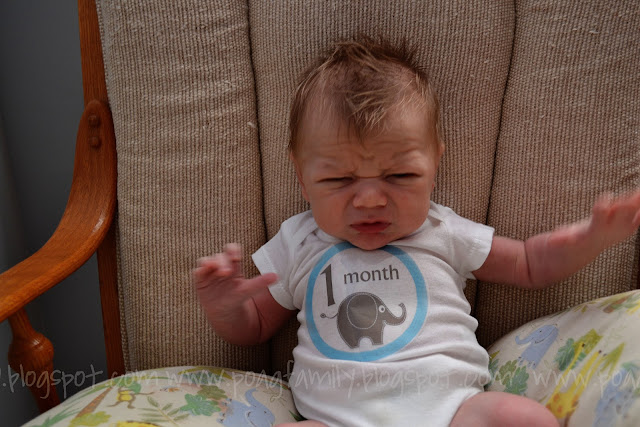 feeding:
ups and downs. nursing is not something that i love.
i wanted too and i thought maybe i would, but i just don't.
since he was about a week old, we began giving him a formula bottle at night.
i looked forward to it EVERY day.
it was a chance for adam to feed him and gave me a long period of time
without him attached to me.
we spent our days nursing ALL DAY LONG.
by the time he was done nursing, he'd sleep for maybe an hour
and be ready to eat again.
it was very difficult and stressful with me because he was never satisfied.
as of now, we are still nursing now and then
but i am definitely not making enough to satisify
so, he nurses for a little bit and within a half hour, is fussy and gets a bottle.
i don't feel like a failure or anything negative
it is what it is and i am a lot happier knowing he is getting a full belly and good naps!
the only downfall that i've run into is that he sleeps a lot more during the day. :(
he used to be up a lot during the day but it was nursing or wanting to nurse
so i guess the downfall isn't so bad -
when he is awake now, he's looking all around and making funny faces
and his awake time is a lot more enjoyable! 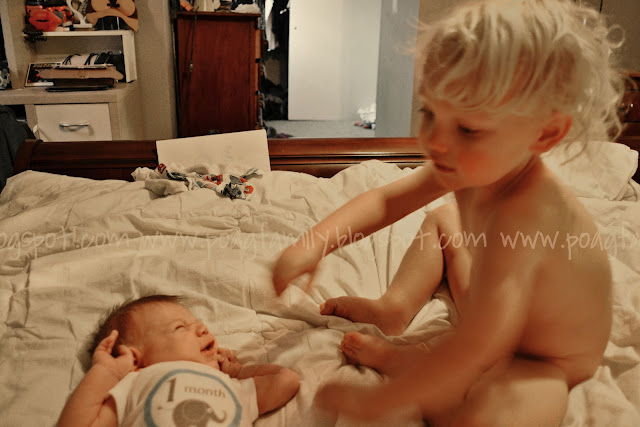 has shocked me beyond belief.
i was SO worried about jealousy with him
and there hasn't been any of the sort!
every morning when we wake up, rhys is the first thing he asks for!
when rhys cries - kullen will come running, making sure things are fine.
he likes to hold him on occasion
but LOVES to kiss and touch him - like ALL THE TIME.
like, we have to tell him to 'back off' five thousand times a day!
anytime that i change rhys - he is right there beside me
either saying 'eww poop!!' or 'rhys buttttttt!' ;]
i cannot wait until rhys is older so these two boys can show me what brothers are like!

poop:
i write about this because i had so many poop issues with kullen
and i haven't had that with rhys thus far!
[again, with the knocking of wood please!]
now that we're incorporating formula more and more
the pooping has slowed but it hasn't been a problem!
which will bring me to one of my favorrrrrite products

between breast milk and formula
both make my boy a little gassy and have those 'poopy' cramps
mylicon helps him SO much
i don't think it necessarily helps him GO
but it helps with the discomfort
which makes for a happier baby and happier mama!

a few of our other favorites: rock and play sleeper!
rhys hangs out in this during the day
and sleeps in it, next to my bed, at night.

mam pacifers!
bubba came out suckin on his fingers
and although i wasn't sure i'd be pro-ninny again
i'll take them over a finger/thumb sucker any day!
anytime that ninny isn't near - he sucks on anything he can get a hold of
[even a blanket!!]

mam bottles.
i really feel that these are the reason we haven't had any nipple confusion issues.
we go between the breast and bottle a lot more these days
and still have no latch on issues.
thanks MAM!

we started with similac sensitive
but it seemed to give rhys more gas and tummy aches
so i tried the advanced
which is supposed to be closer to breast milk than any other.
since making the switch, his tummy problems seem to have faded
and his poop even looks like the seedy 'breast milk poop'
so i'm thankful that i found a good formula so early on
versus the troubles i had with kullen!

and although i haven't used this much
i know it will be a lifesaver!

i love you so much lil bubba <3
you're arrival to our family has brought us all such happiness!
you are loved by so many already!
i cant wait to see what our next month has in store!

He is just adorable! I L-O-V-E the name!! So unique!! And as far as that little bassinet thingy, If my hubby and I ever have another baby, I'm getting that thing FOR SURE!! I can't wait to continue reading about him and your family!!

Happy One month Rhys :) He's such a handsome boy.

I can't believe that little squeaker is a month old already! I can't wait to love on him again soon! I miss hims (&Kullen!) so much!

What a handsome man! Happy one month Rhys!

I am jealous of your sleep!! ha and I love that rocker too. I'll have to try the advance formula because she has stomach aches and I have her on the sensitive now.