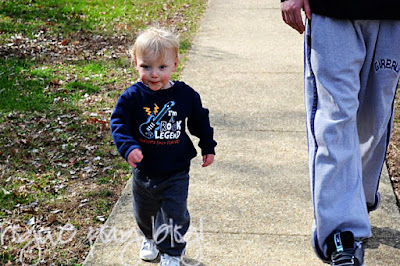 [forgive the late post]
big things this month, dude! you have continued to amaze me with how smart you actually are! ;]
you are still LOVING books. every evening after your bath, you grab a book and throw it on my bed, climb up and hop in my lap. your two favorite books as of late are 'hand, hand, finger, thumb' and 'go dog, go' - both of which get super old, SUPER FAST! but we love you so we push through each repetitive syllable night after night! you are especially loving 'hand, hand, finger, thumb' and the part that goes 'drum drum drum drum drum drum drummmm' because you tap the book along with the 'rhythm'! 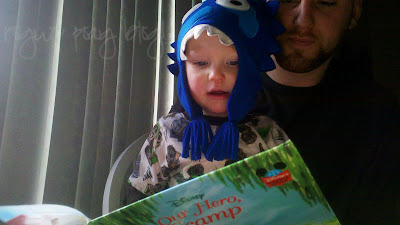 your vocabulary is increasing by the day. in fact, you've shocked me with some of the words you've come up with without us working on them with you. the way you speak is quite funny to me and your dada! you try to repeat a lot of things that we say but end up speaking 'kullen' but still enunciate the rhythm of the words. typically, we understand what you're saying but nobody else does! ;]
you rarely pronounce the first letter of any word! some new ones this month are 'ock' [sock], 'oos' [shoes], 'ish' [fish], ree [tree] and most importantly 'alk' [walk]. your independence is out of control, dude! you want to walk every where and are sure to let me know it!
trying to shop or get you to sit in a cart just doesn't happen anymore. you repeat 'alk' and/or scream bloody murder until i let you down. this is quite challenging when trying to grocery shop or run errands so we are letting you have your independence [mostly for our sanity and so we aren't 'those people' with the screaming toddler in the store]. but don't think you won't be on a leash here shortly. both your dad and i have already had a 'lost' scare and thought you were gone!

you are still identifying tons of things! one of your favorite things to do is look through the photobooks i've made and point everyone out. i can ask you where mama, dada, grandy, goob, mimi, steph and john are and you point to each one of them! you also point to my stomach when asked 'where is the baby?' :] you love to give kisses to the baby too! :] 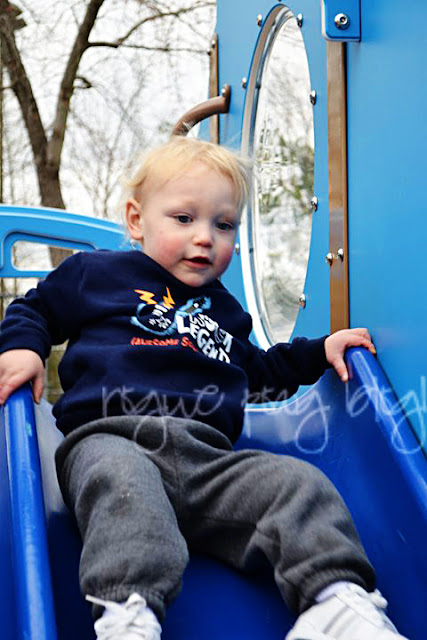 i'm not sure if i mentioned last month [because i'm sure you were doing it then] but you LOVE to blow 'zerberts'. at any given moment you will come up to me or adam and lift our pants/shirts to blow a zerbert on our bare skin. you make the FUNNIEST noise and it cracks us both up. neither me nor adam are as good as you! ;] us laughing makes you want to do it even more and you just think you're the funniest thing ever!

we've had a couple downfalls this month. :( you suffered two more seizures due to a high fever. you were sick for an entire week, it was awful. we couldn't get your fever to come down and all you did was sleep/lay down. it seems like we spent an entire week in bed, aside from ER and doctor trips. we have an appointment to see a neurologist at Children's hospital but it isn't until June. your doctor says until you have a seizure that is not accompanied by a fever, there isn't much they can do. we are taking things day by day and i am doing everything possible to keep you away from sick people!
we are teaching you to cover your mouth when you cough [unfortunately you still have a lingering cough] and wipe your nose when it runs.
the other downfall was your toe :( while over at grandma's house, a door fell on your toe and hurt it pretty bad. it's only been 3 days sine it happened but it is already healing up great. i thought for sure we were going to lose that toenail but now i'm not so sure. we may lose half but i don't think the entire thing will go. i'll report back on that subject. 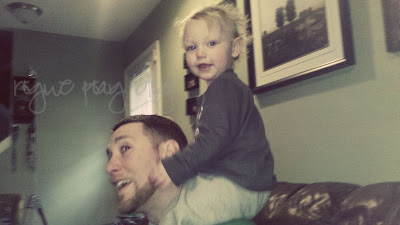 [crappy cell phone pic!]
you still love singing and your favorite is 'the wheels on the bus'! you love to move your hands in circles [for the wheels going round and round]. you surprised us the other night when you came over to the couch and said 'mama ba ba bus SH SH SH!' and put your finger up to your mouth! [the mama's on the bus go sh! sh! shhhh!] me and adam were so surprised and celebrated you learning that and now you do it ALL the time! ;] you're so funny, man!

i feel like you've learned a lot of new animal sounds also. you love to play with the 'see and say' and your 'leaptop' - both of which do animal sounds! you learned 'meow' for cat, 'neeeeeyyyy' for horse, 'oohhh ahhhhhaaa' for monkey, 'ack ack ack' for duck, 'arrrr' for monster and dada is working on 'ribbit' for frog but you haven't quite gotten it yet. i'm sure you will within the next few days! 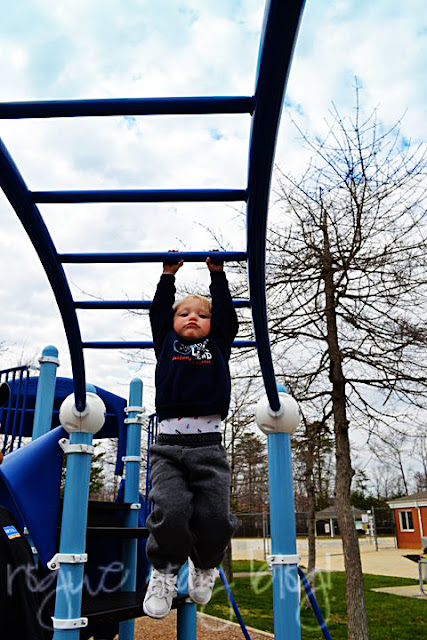 [hanging all by yourself. mr. independent]
you still love your cars/trucks/buses and one of your favorite things to do is point out buses while driving in the car. and go kullen - you can actually say BUS and pronounce the B! ;] it's so cute when we pass a bus and you point and say BUS!
you love trucks still and call them 'ucks' :] you ALWAYS want me or adam to play with you and will carry two of your trucks over and whine 'ucks' until we give in and play! i still don't know how you do it man, mama's knees hurt crawling around on that wood floor!!!

we finally bought you a potty! :) you have yet to pee or poo in it but we sit you on there at least once during the evening and ask you if you have to go. you usually tell us when you poop by signing and saying 'poop!'. occasionally you will trick us and say it when you didn't really go and you get the biggest kick out of it! ;]
i think we started this 'potty training' thing at just the right time. i am not going to press you but i wanted to start exposing it to you that way when you're ready - you'll know what to do! you can definitely hold your pee which makes me think you are getting closer and closer to being 'ready'! i am awaiting the day that you actually peepee or poop in the potty! a special reward will definitely be given! 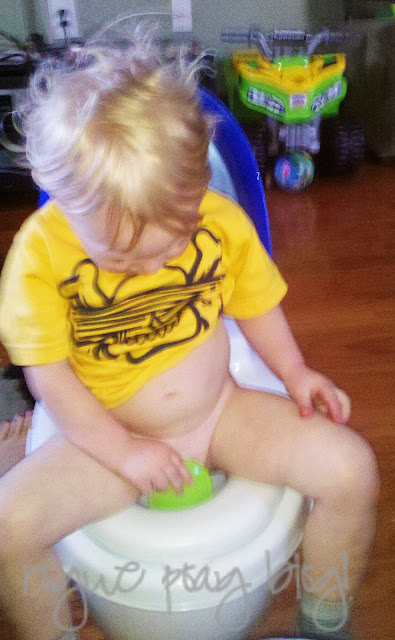 [crappy cell phone pic!]
a really cute thing you do is want THINGS to hold you. currently, when you want to be held you will put both of your hands together [kind of like a book] and reach up/over to whoever you want to hold you. now you've started doing it with inantimate objects such as the tv or a book. i always say 'the tv can't hold you maaaaan' and you grin shyly. it's REALLLLY cute! ;] 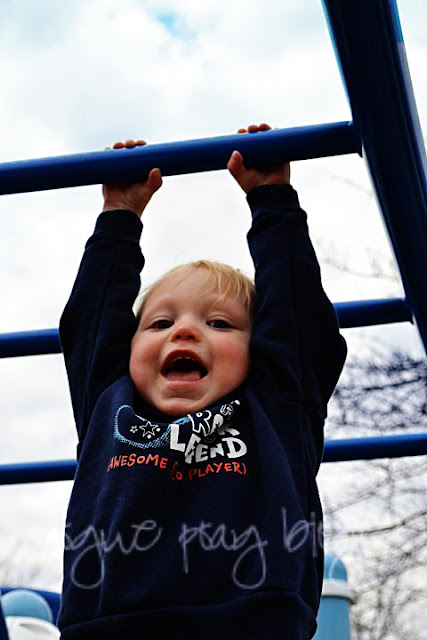 He is ALMOST 2 ohemgee!!

I still can't believe he's going to be TWO this summer - and that you'll be all big & pregs with hims little sibling! he's growing up to be such a cute and intelligent little boy - you and Adam have done an amazing job! :)