disclaimer: the post will probably be all over the place as i don't have one particular thing i'm writing about. just a random mish mash of my thoughts/plagues/things going on lately.
i want to move south. like to florida or georgia or i'd even take texas. somewhere that doesn't see the season bitterly referred to as winterrrrrrrrrrrr. i get SO jealous reading some of my blogs [ahem - kelle, emily and even ashley - although i'm not sure where she lives but anyone who can take an impromptu trip to the beach in the middle of february and have their son in shorts is someone that i'm surely jealous of!] that i want to pack up my entire life and move to a beach. what i would give to live in a hut [no 400$ electric bill, that's for sure] and spend every day at the beach. i have it all planned out. hubby and i will run a little cabana on the beach and serve tourist with drinks and food [made by me, of course] while the kids teach tourist kids how to fly kites and do other beach-y things. until that day .. i'll keep reading these blogs in complete jealousy.
kullen is totally a sissy boy! he has developed FEAR and a lot of it. on monday, i took him to chuck e cheese for what i thought would be a super fun mama & kullen day. NOT! he was scared of every.single.thing! the ONLY thing that he would cooperate for is the booth that snaps a picture and prints it out like a drawing. we did it three times. 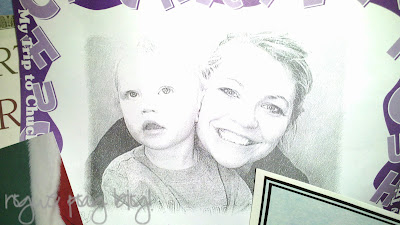 i walked out of there with about 15$ worth of left over tokens. you see, the stupid machine told me i could choose between 5$, 10$, 15$ or 20$ worth of tokens. i put my 20$ bill in, selected 5$ and what do you know - TWENTY DOLLARS WORTH OF TOKENS POURED OUT! i tried to return them but the horrible witch who needs a lesson in customer service nice lady told me they couldn't do that. gr.
he is also scared of the monkey paintings on the walls of MyGym. yesterday we took him up for free play and he got freaked out anytime we were near the PAINTINGS! i kept trying to tell him they were nice but at once point he just looked at me, looked at the paintings and then said 'bye' and walked away! HA! i do believe the monkey thing stems from the MyGym party a few weeks ago where a person in a monkey costume came out to greet the kids and kullen totally lost his mind.
me and the hub have been carpooling to work. it's been nice, although i have to get up slightly earlier than normal. i now get off at 3:00! :D that makes up for everything! plus, i don't have to make the long walk from my parking lot to my building alone anymore!
my dad & robin came to visit this past weekend. my sister went back with them. i was very proud and happy for her because it was something she decided on her own. i was happy that she was going to get away from MD for a while and spend time with our family up north. happy that she would be taken care of and fed three meals a day! i can't say i'm super happy right at this moment, though. it seems like she's already making plans on when she's coming back here. i don't understand her rush to get back to this hell-hole of hers. when she is here, it seems like there is always drama. she has passing out spells, i never see her, she fights with her boyfriend, struggles with money, things get taken/stolen from her house so i guess i don't understand her rush. i want her to be happy and healthy and think if she spends some time up there, it will happen. unfortunately, there is nothing good for her here. she doesn't see it though and although she claims her and her boyfriend are broken up; part of me highly doubts the truth to that statement. i guess, in my own selfish way, i know that when she is up there that she is safe. if anything happens (passing out spells) she will be taken to the hospital immediately. here, i don't have that comfort. up there, i know she will be well fed and well taken care of; something else i don't have here. i will/would definitely miss her but it's not like i see her all that much when she is here anyway so i just hope she makes the decision to stay up there a little while longer and spend as much time as she can with our dad, our grandparents and our cousins. i know if i could get away for a while without the stress of bills, jobs, food, etc ... I WOULD! so say a prayer for her, wouldja.
i am rounding up my first trimester. two weeks to go and it will be officially over! not that it has been awful or anything but it's just exciting to get through it and move on to the next pregnancy chapter! i have mostly felt great, aside from being tired! i have had a few rough days, where i felt queasy but they are short lived and i am SO grateful for that!
i am, however, having trouble with my sciatic nerve - again. i dealt with this during my pregnancy will kullen but not until later, like third trimester. i do believe that the pain was from kullen being on/near the nerve and causing pressure to the nerve but this can't be the case now as my baby is only the size of a prune! i'm wondering if perhaps i damaged a disc during my labor with kullen and that is why i am having sciatic nerve troubles already. i will ask my doc next week and report back for inquiring minds!
i wasn't super skinny to begin with so i think i have been 'showing' for a while. i noticed last time that it is beginning to look more and more like a 'pregnant' belly versus a 'fat' belly but i am still in my regular jeans (just looping a hair tie through the button hole! haha) i still haven't announced it officially yet (facebook) but will soon enough. i have another sonogram in a few weeks so i'm sure i will post that picture then.
lately, i have had the biggest sweet tooth - ever.
i've also recently discovered nutella. holy! i could eat that stuff every day - on ANYTHING. i almost dipped a sour cream and onion chip in it but then realized i was around coworkers and didn't want to be judged so i didn't. instead, i just ate the nutella plain and licked that spoon completely clean! ;]
jessi and i got selected to host Pull Ups Potty Dance parties through HouseParty.com! we are going to do a combined party to make it all the more fun. we're currently planning snacks and other fun-tivities :D i can't wait to see all the TODDLERS dancing around to the potty dance song. although most [ahem, MINE] will have no desire to be potty trained, it's still a neat idea to get them used to the potty and hopefully WANTING to peepee on it! one can only hope, right? 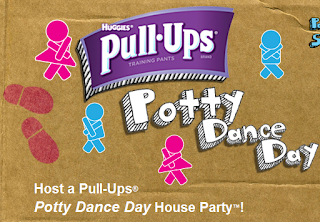 i was having a conversation with the hub yesterday about breast feeding, a really HOT topic amongst some bloggers. i really try not to judge others for their decisions or strong beliefs but some people are just really extreme! if you believe breast feeding is the most amazing thing since sliced bread - good for you. but no one should discredit or down another mother for her choice NOT to breastfeed. just as you have a CHOICE to, another has a choice NOT too. that being said, i do plan to breast feed my next baby just as i PLANNED with kullen. and i DID with kullen while we were in the hospital but when they discharged me and kept him, they fed him from a bottle. once we got him home, he completely refused the breast. i pumped for a month and he was exclusively on breast milk. after a month, i realized it was too stressful for me to spend time away from my newborn to pump when i was hardly getting the ounces that he was eating. i am hoping with the next baby, i do no have these issues and i can breast feed my entire maternity leave.
i understand that some women do not have to return to work and can spend their entire day breastfeeding and that is awesome for them. in fact, i am jealous. if i can, i would like to breast feed during my home hours and have enough stored milk to send with him/her to daycare during the day. this is me hoping for a perfect baby that will drink from the breast and a bottle, something that rarely happens. this is also assuming that my daycare provider won't mind handling milk that came from my boob. it's nothing something everyone is comfortable and even has a 'breast feeding mom' i don't know that i'd be comfortable handling someone's booby milk!
anyway - back to the topic, i was discussing all of this with my hub last night at dinner. both of us agreed we didn't understand how people breast fed beyond a year. i couldn't imagine breast feeding a one year old with all their squirming and teeth, ouch! so, adam asked 'what is the point of breast feeding so long anyway?' so i explained that for some women, it is all about the bonding with their baby. his response: i think i need to bond with you!  HA! is anyone surprised? ;]
we are going to the CAPS game tomorrow! definitely excited since we, again, have great seats! kullen has been so spoiled [as have we] this season with all the games! i just love hearing him say 'lets go caps' in his own little language! ;]
saturday, we are heading down to mandee's house for some homemade lasagna, desert and more CAPS fun [on tv!]! :D
we are excited for the weekend! what are y'alls plans!?
don't forget to enter my CSN giveaway for a chance to win 25 buckaroo's!

I totally don't get the breastfeeding arguments at all. It's hard enough being a mom that we don't need to turn on each other over this subject. We should be supporting and helping each other. Ugh!
And on the fear thing...I think all toddlers seem to go through it. My little one just turned 4 and I think he is finally getting out of that stage. Or at least I hope he is before I take him to Disneyland next month!

HAHAHAH I am literally sitting here laughing HYSTERICALLY!! I don't mind your boobie milk, LOL!! Your baby is YOUR baby...I will feed him/her whatEVER you want them to have!! You know how hard I tried to breastfeed so believe me, if I can help by giving your baby a bottle of your breast milk, I will be happy I got to help you feed your baby the way you want! Sheesh, it's only milk..it's not like your asking me to touch it or anything, ahahahaha!! :D

no need to be jealous of our weather. in about a month it will be 115 degrees here :)