my boy is sixteen months old today. i can't believe how fast time has flown. when we aren't talking about his most recent feats, it seems we're reflecting on 'back when'.
the hub and i were watching weeds tonight and they showed a clip of nancy's son laying on the table at his pediatrician's office, fumbling with his ninny. i was thinking it and adam said it 'i remember when kullen did that'. it's hard to believe we were so amazed when he could move his hand to his mouth to put his pacifier in, all by himself. as i looked at him, shoveling food in his mouth, i am even more amazed. sometimes i feel like he's not where he should be [on the 'learning curve'] that is, but in the next moment i am blown away at the things he knows how to do and/or picks up on.
i love this little man more than anything in the whole world. he makes me laugh like no one else. there are moments when i don't think i can take anymore of his screaming and then he'll look at me and smile and my heart just melts.


how 'typical boy' is this photo!﻿ 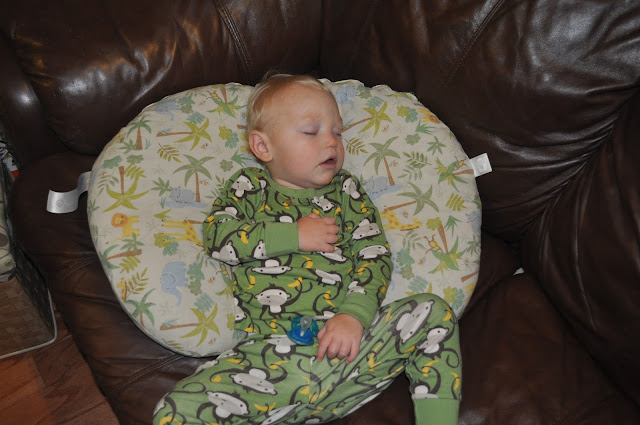 can point to - eyes, hair, nose, ears, button [belly button], piggies, butt and wiggles his hands when you ask where his hands are. we're currently working on mouth/teeth/tongue which he cannot distinguish just yet but will point to the general area if you ask where any of the three are!

sings/hums more and more. we sang 'twinkle twinkle' about thirty times the other night and i SWEARRR he sang along to 'up above the world so high' ;]

will touch the oven or a cup and pull his hands back quickly saying 'hottt' :] he also occasionally goes to the oven and peers in the window and says 'cooookie'. that's because i was baking cookies a couple weeks ago and he kept looking in, so i repeated 'cookie' over and over again, and he finally said it.

still isn't great with a fork or spoon just yet. probably because since he began eating adult food, he used his hands. i was never one to spoon feed [except for baby food] so i probably ruined him. he still gets a fork or spoon with every meal and now and then will stab at food but mainly he eats with his hands. little caveman ;]

'happy feet' - most anytime me or adam say it, he moves his feet really fast, like a trot and grins from ear to ear! another form of dancing, which he LOOOVEESS to do!

loves to give high fives, especially if you get really into it and act like your going to slap his hand really hard ;]

recently, he's been trying to 'wrestle' me! after his bath and pj time, i have been bringing him in our room to hang out with mommy and daddy before going to bed. he climbs up on our bed and flops himself on me. he acts like he is going to bite or hit me [i know, this doesn't sound good] but doesn't actually go through with it, instead just squeals and laughs. it cracks me up!

he has become a professional climber! he climbs on beds, couches, chairs up on to the tables and anything else he can climb up! he actually climbed up on the sitters couch and over to a stack of chairs and fell and got his first tiny bloody nose, the kid is crazy!

the cutest thing he does lately though, is play with his trucks/trains. he scoots around on the floor going 'vrrooooommmm' [or sometimes just a random noise] pushing his vehicles. it's just allll boy to me. i usually find myself just watching him entertain himself. it is the cutesssttt thing in the world to me! i'm hoping to post a video tomorrow [yes, tomorrow .. i'm dumb and uploaded my pictures/videos at work, ugh.] occassionally, he will even let me play with him! ;]

so there are some of the things little mister is doing at sixteen months! ;]


ALSO!!!
jessi from Caterpillar Family and I are co-hosting a Thursday Blog Hop! We are both super excited!! check back tomorrow for the first [of many] link ups! :]

awww, I've been waiting for this post! hims is getting SO grown! don't worry about the "learning curve" - every baby goes at their own pace... he is healthy and happy and that's ALL that matters. I love watching him grow right along with you... he is such a joyful baby to be around, even when hims is cranky! :)