it happened. kullen was stung by his first bee! not only once - but TWICE!!! i managed to go the first five years of my life without a sting and yet my son gets it at only 14 [and a half!] months of age!!! the poor little guy is going to be traumatized of ALL animals at the rate we're going!!!

this weekend we went away with our friends to their lake house. it was a BEAUTIFUL weekend with great friends. everything was nearly perfect, except for poor kullen .. stung by bees AND cut his seventh tooth! fortunate for him [unfortunate for us] i didn't take ONE single picture of his stings or tooth. the whole sting-incident shook both kullen and mama up so a camera was the last thing on my mind.

let me set the scene for you ...
it was a beautiful sunday morning, all had risen in the F household. kids were playing and adults recapping last nights events. scrapple, sausage and bacon were being fried up. apple fritters were being fritted. i was sitting on the couch with kullen - drinking my coffee and letting him eat a banana himself when he plopped off my lap onto the floor to chase around the dogs or perhaps the kids when all the sudden he began WAILING - and i mean WAILING! i jumped up and thought maybe he had gotten his fingers smashed in the back door but then i heard it ... the word ... BEE!!!!!! i scooped him up and saw it. i SWEAR i saw TWO bees but others later informed me that only ONE bee was killed/found so unless we had a vanishing bee - the SAME bee stung him TWICE on his foot. he stepped RIGHT on it and was stung directly in the middle/bottom of his foot and once again on the side. NOTHING was calming him down. he was twisting and turning in my arms. i honestly didn't know WHAT to do. thank god for the other mothers there because they immediately sprung into action. searching the cabinets and fridge for baking soda. apparently baking soda mixed with water will draw the sting/pain out. so, while they were doing that - i was TRYING to catch a glimpse of his foot to see if there was a stinger in there and thankfully there wasn't. another mother got a dose of Ibuprofen for him and shot that into his mouth. after what seemed like an HOUR of screaming, mr man FINALLLLLLY calmed down a little bit but i knew the crying and everything had worn him out so we went upstairs and sure enough, he napped for about an hour. when he got up, he had clearly forgotten about his foot because he stepped right on it and immediately began crying from pain again. he kept trying to walk on the foot and bringing it right back up and reaching for me to pick him up but in a couple hours, he had completely moved on and was back to running all around the place!

as i mentioned before - i didn't take any pictures this weekend :( but i did manage to snap one of me and kullen with my friends camera :) 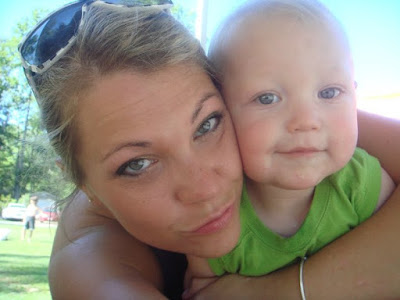 all in all - the poags had a GREAT weekend away with friends who are more like family. memories were made and won't ever be forgotten, including a horrendous [hehe] bee sting!!!

Poor Kullen!!! ugh. That's the worst. I would have been the same way. Thank God other people were there to help out. I hope his tootsie feels better :)

That made my heart so sad for my sweet kullen. Grandy says well, well, well.

Poor Kullen!! I would have been in tears =( Glad tou guys had an awesome weekend