well, night two. complete and total SUCCESSSSSSSSSS!!!!! :D
thanks to - hub! he was super dad last night and i praise/thank him for it!

so, last night things were thrown off a tad ... after adam gave kullen his bath, i called and asked him to meet me at rita's, which he wasn't too happy about since he had just bathed kullen but he did anyway. we chatted with some friends and ate some ice and then went home. it was around 9pm - which is later than kullen usually stays up so i figured bedtime would be a cinch. ha!
i made his sippy, put his pjs on, turned the light off and rocked him while he drank. well - problem number one was that he didn't want his milk. he didn't even drink half, so i was worried i'd be up in the night with a hungry kid. so, i kissed him and put him in his crib. immediately he began crying and kicking his feet. i knew i had to leave him though, and i did. he screamed for what seemed like EVER and my heart was breaking. the screaming never slowed up so after about 10 or so minutes, i went back in and picked him up and rocked him a bit. i knew he was sleepy and would go to sleep with me holding him but that defeats the whole purpose of what we're trying to do - so i turned on his little lamp so he wasn't in complete darkness and put him back in his crib. he was crying but it wasn't AS instense as before. so i shut the door and went and sat on my bed with the monitor. finally, the crying slowed and turned into wimpers. i told adam that if he stopped crying within a few minutes to go in his room and check on him and turn his lamp off. i jumped in the shower and when i got out - adam was walking back in our room. he says 'he saw me!!' but i didn't hear crying on the monitor so i asked him what he meant. he said that he tip toed in kullens room but as soon as he got the door open, kullen peeked his head up and looked at him! haha! considering i didn't hear crying, i figured kullen was half asleep when he did that. SO - i waited a few minutes and went back in and turned his lamp off.
then i questioned myself about that ... should i leave the lamp on all night so if/when he wakes up in the night he's not freaked by pitch black? i wouldn't have a problem but the lamp is bright so adam put one of kullens little baseball hats on top and i just have a fear of that starting a fire. i need a night light for him!
so, anyway - decided to leave the light OFF.
well, went to bed and of course kullen woke up crying around midnight. i didn't budge. he was screaming pretty loud - loud enough to wake up hub (which says a lot!)
well adam got up - and i figured he'd just bring him back in our bed but instead the crying ceased and adam came back to bed within 5 minutes. i couldn't believe it! back to sleep we went. well, around 3:00am - the screaming started again, instensly! adam got up again!!! woah! i think he knew i was going to just let him cry (i had stated that to him earlier, but come on - we all know i wouldn't have really done that for long!) well, after a few minutes the screaming didn't die down and i yelled to adam 'just bring him in here' ... see, adam gets up for the day between 3:30-4am so i felt bad that he was up taking care of kullen (obviously not bad enough since i continued to lay there, hehe) ... but, after a few more minutes, the crying stopped and adam came back to bed! it was 3:20. it took him exactly 20 minutes to calm mr. man down and get him back in his crib.
my alarm went off at 5:20 this morning and i woke up to an empty bed. something i haven't done in a WHILE. i grabbed the monitor only to realize it wasn't even ON!!! which scared me, what if he had been crying and i didn't hear? (yeah right! haha) so, i crept in his room only to find him sound asleep :) 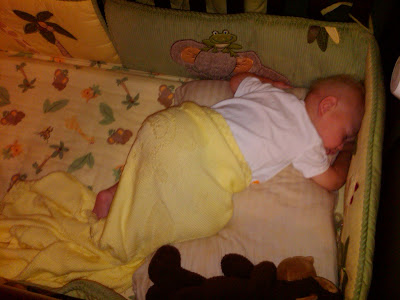 so, here's hoping this routine continues. now that we've had a successful night of keeping him in his crib, i feel like it will be easier and easier. can't wait for the day when i blog about my boy sleeping in his crib without waking up AT ALL during the night! ;]

disclaimer:
i know people will think 'her one year old isn't sleeping through the night yet?!!!' but despite what most think - it's not THAT uncommon. plus, i consider a child to 'sleep through the night' when they are no longer waking up to feed. just because they get up once or twice due to being startled out of sleep, bad dream, turning the wrong way or whatever the case may be - doesn't mean they aren't sleeping through the night. kullen sleeps ALL night! he may wake up once but it's brief and really, most of us adults do the same thing. i know i do - to go the bathroom, to adjust myself, because i had a weird/bad dream ... so before anyone starts thinking bad thoughts about a kid (which is wrong in itself!)... just wait until YOU have a kid! it's not as easy as it seems, trust me! ;]
sorry for the negative part - but i have just seen blogs, comments and random posts of people down talking kids and their parents and half of them aren't even parents! it's like how dare you judge anyone's parenting when you aren't even parents!! how dare you judge anyone's parenting period. until you've been in their shoes - which you NEVER will be because no two kids are alike - don't judge!

SO proud of you guys!! And don't worry, if there is ever anyone to NOT judge you on your kid's sleeping, it's ME ;) haha. Stay strong and before you know it he WILL sleep all the way through the night for you- IN HIS CRIB :) :)

It takes a lot of strength to parent and it's hard to be sure you're doing the right thing. It's SO easy for someone to say what they would or wouldn't do when they haven't been there. Be confident that you are doing a GREAT job. Most importantly, you have a very happy, loved little boy. Everything else is an afterthought!

Thank you for coming by my blog and following me. I'm following you now and really looking forward to getting to know you!

Hi! I'm following back! I think your blog is ADORABLE, and I absolutely love your son's name! :0) Can't wait to read more.

Hi! I passed an award on to you! Check it out here: