since i am going to see pepper/311/offspring tonight with fellow blogger mandee - i am in concert mode! =D i figured what better to blog about than concerts!? :D

lets start with my very first one - hanson!!! yes, HANSON!!! i was THE BIGGGGEST hanson fan, ever. zach<3333 i actually remember the details of this concert very well. my dad was supposed to buy us the tickets - this was when you had to CALL ticketmaster and get tickets. well, my mom was working a part time job on this particular saturday so my dad was supposed to call promptly at 10am to get tickets. well he didn't wake up (obviously neither did i) and didn't order our tickets until later on - leaving us with tickets in the VERY last row of the pavillion!!! (remember this dad?). i didn't even care because i just knew zach would see me and pick me out of the crowd and ask me to marry him right then and there! BA HAHA! well, we get to our seats (we being me, my sister, our friends lisa and kelly and their uncle rick) and some people had HUGE signs that were preventing us from seeing. we (me and lisa - kelly and my sis were like 6, they could care less) complained to the staff and they said there wasn't anything they could do. we were SO upset. buuuut, the people in front of us said they knew someone with tickets closer to the stage and they would trade with me and lisa. SOOOO - we got to see hanson MUCH closer - unfortunately, zach did NOT see me and did NOT ask me to marry him. my love for hanson still remains - but definitely not like it used too :) i haven't seen them in concert since! haha 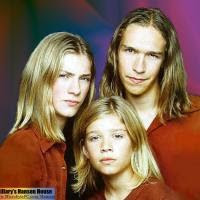 a few years later ... i replaced my love for zach hanson with mr. marshall mathers <3 this love has never died (haha) infact - i sorta think my hubby looks like eminem now and then. that's actually the original reason i was attracted to him! hehe!
so, my dad was a litttttle strict when i was growing up and wouldn't buy me tickets to eminem, go figure. LUCKILY - my bud terry from private school loved eminem as much as i did and called me one day saying he had 2 extra tickets to his concert, the anger management tour. after begggggging my dad - me and cousin were able to go with terry and his cousin to see him!! :D ahhhh-mazing! i was actually lucky enough to see him everytime he's come to our area - which is three! the second time was in the summer of 2002 - the anger management tour 2! me and cousin went :) and the last time was in 2005 for the third part of the anger management tour! included in that 3 part tour i saw some other great artist - limp bizkit, papa roach (who i've actually seen more times than i can count! haha), 50 cent, lil john, busta rhymes, d12, obie trice, mobb deep, & cypress hill to name a few! 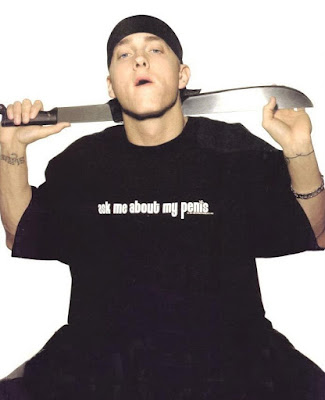 i also went to an alanis morisette concert with cousin in 2002. my cousin is her BIGGEST fan and has seen her everytime she's been around and i was lucky enough to go with her this time. most likely because she won the tickets [probably from z104 - remember them?! haha] on the way home from my high school graduation! ;] buuut the way alanis swings her hair and dances around stage is awesome but she can still sit on a stool and sing an amazing ballad and manage to keep the audiences' attention! i loved her :) 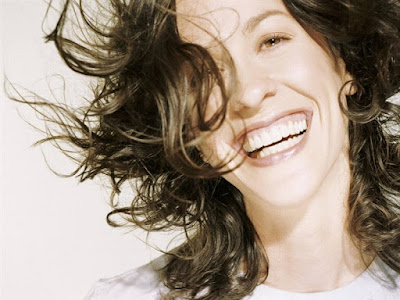 also, regarding ticket winning - my mom won tickets to a lenny kravitz and p!nk concert and was nice enough to let ME have the tickets so me and cousin could go :D i do believe this was my first p!nk concert. you see, i LOOOVEEEEE p!nk. from the first time i heard her song and saw her bright pink hair - i loved her! i still, to this day, love her. i see her EVERY chance i get and don't plan on changing that. she has one of the most AMAZING voices i have ever heard and not to mention she's GORGEOUSSSSS!!!! i have actually been EXTREMELY lucky when it comes to p!nk. in 2006, p!nk performed a private concert at XM radio here in DC and because i was her myspace 'fan' ... they sent out a myspace bulletin saying the first [number of] people that respond will get free tickets. so, i immediately ran down to my cousins desk [she works down the hall from me] and told her to send an email. so, her and i BOTH got 2 free tickets to see p!nk at this private concert. her boyfriend at the time was unable to come so my little sister got to attend. the 4 of us, i'm sure, will NEVER forget that day. we got necklace passes [that still hangs in my car] with p!nks picture and the date of the show on it. we got to sit in a tiny room, with about 40 other people and listen to her perform. best.[concert]day.of.my.life! i even got to go to the microphone and ask her a question! i asked her 'was the song 'the one that got away' written about anyone inparticular?' .. her response was 'i'll never tellllll' - in a singing voice :)
last year, i got to see p!nk again for her 'funhouse' tour. we [steph, john, cousin, zannie and mandee] got general floor [standing room] tickets and mangaged to get ourselves SUPER close to the stange. basically, front row! another AMAZING concert experience!! =D can't wait to see my giL p!nk again <3 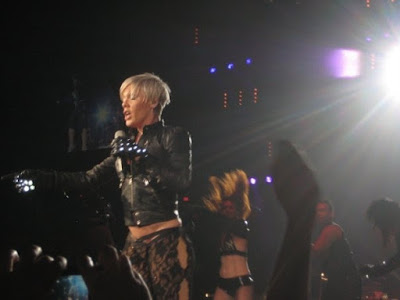 photo actually taken by me :)

another band that i've seen everytime they've come to town is paramore!!!! i LOVE LOVE LOVEEEEEE me some paramore. infact, i will be seeing them for my fourth time at the end of this month! :)
the first time i went with hub, sis, kath, michele and matt - what a BLAST!!! =D we worked our way as close as we possibly could and rocked out - then went and watched the other bands from the upper deck! 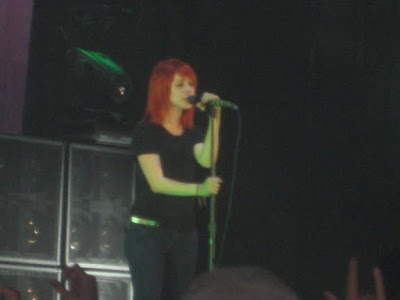 the 2nd time i saw paramore - was 5 days before i gave birth to my son :) we saw them with no doubt - BOTH were amazing! <3 check out these - first one is pre-pregnancy, obviously. 2nd is 9 months prego - still rockin the same shirt ;] 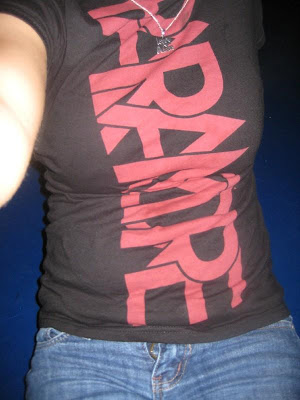 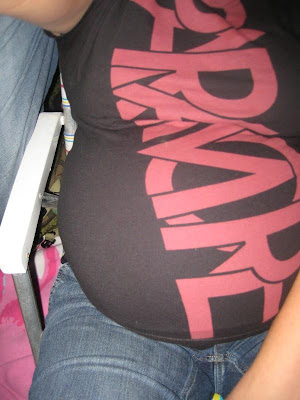 the 3rd time seeing paramore was the ulalume festival right around halloween. we got general standing area and got pretty close to the stage that time as well. this time it was just me, sis and hub <3
and the concert coming up - which there will be a blog about i'm sure - is also general standing and sis and hub are going but also my kathgirl is going too :D cannoooooottt wait! =D

another FUN concert was right before i found out i was pregnant - and it was NEW KIDS ON THE BLOCK!!!! =D now, i have ALWAYS wanted to see them. back in the 90s when they were popular - i remember they played at lake compoundce in bristol, CT which was RIGHT by my house. i could hear the concerts from my bedroom window. i was SO upset that i couldn't see them but you bet your butt when they came back to maryland in 2009 - i was RIGHT there!!! me, cousin and aubrey went and acted like we were kids again and had an absolute BLAST!!! even rocked the side pony ;] 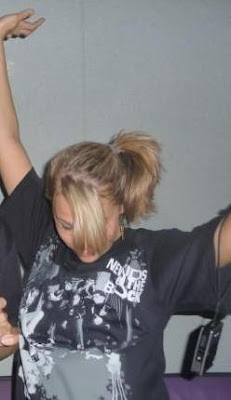 maroon 5 - ahhhh. i have seen them twice! :) me, hub, cousin and eric went and saw them once and loooveeeed them! :D and we also got to go see them when they toured with counting crows - now THAT was a good show! :) this time we were joined by mandee and her hub. those two bands were amazing and hope to see them again :D 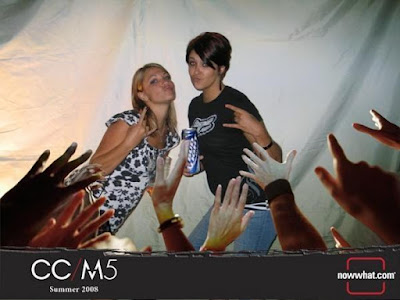 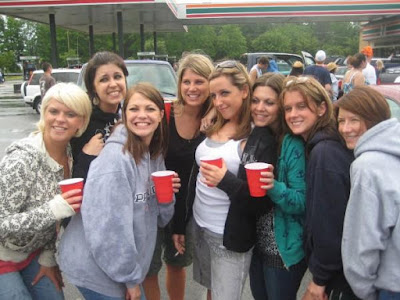 i have been SO lucky when it comes to concerts :) i'm excited to add pepper, 311 and offspring to my concert list and in a few weeks i'll be adding a few more - including shinedown and sevendust! they are performing at the Carnival of Madess tour and we got tickets. Chevelle is also going to be there - and me and the hub LOVE chevelle and have already seen them twice :D puddle of mudd will also be there and we've seen them before at the chili cookoff (with chevelle)!
speaking of the DC101 chili cookoff - we've gone a couple years now and have seen another handful of great bands - papa roach, third eye blind, red jumpsuit apparatas, dan band, finger 11, seether, buckcherry, three days grace, breaking benjamin, hoobastank, and carbon leaf just to name a few!!!

well, thats all i can think of at the moment - and i have to get some work done before i get outta here for the weekend!!! i'll be posting about tonights concert later on! :)

Wow you sure have had your fair share of concerts, ha! Oh my gosh, HANSON LOL! I just heard "Mmm Bop" playing in a store the other week, haha! I was never a Hanson fan, my sister was but I was a NKOTB fan and went to their reunion concert at the Verizon Concert. LOVEDDD IT!! Have fun at your concert tonight! Can't wait to hear details and see pics :)

Ok I'm totally cracking up in LOVE with your paramore shirt pics. Ok first one [paramore] second one [paraMORE] BAAAAHaha ;)

love this post and can't WAIT for tonight! I think the Pink concert was one of the best shows I've ever been to!

PS - Shinedown was at Chili Cook Off last year too when we went! =)

I am sitting at my desk cracking up !! I can't laugh to much about Hanson since my 1st concert was The Spice Girls {you can luagh it's okay} ... they did put on a great show & I really wish I had a picture of the HUGE white platform shoes I wore that night. I couldn't think of a single Hanson song until reading Jenn's commen now I can't get it out of my head.

Hey, what about the concert Grandy and I took you and cousin to at Myrtle Beach. Right down front...... at the House of Blues. I think we saw Edwin McCain. Love ya