so, while i was on vacation - kullen's babysitter stephanie had her babygirl. Gianna Adele was born June 2nd at 3pm weighing in at 6lbs 2.2oz and 19inch long - and this is AMAZING considering she was 5 weeks early! i so badly wish i could have been home to see her the day she was born - even though she wasn't allowed visitors that day! being 5 weeks early - she was doing VERY well. while stephanie was pregnant she was given steroid shots to speed up gianna's lung development because she knew she would be early and she was right!! even though she got the shot, they still had her on oxygen to make sure she was getting the proper amount of air and also had her on a feeding tube :( my heart broke for stephanie and john. when kullen was born, he was kept 2 extra days and the tubes and IVs were heartbreaking - so i defintely felt their pain. well, on friday - they decided to transport gianna to children's hospital for better medical treatment and in my opinion better STAFF! well, last night she was taken off her ventilator and feeding tube! :) i was lucky enough to be able to go visit her sweet face today during my lunch and she looked amazing! i got to watch stephanie feed her a bottle and see her open her cute little eyes. my heart still breaks for stephanie and john though - they have to leave their baby every night. i couldn't imagine but as i told stephanie - the things a mother will endure for her child - and the strength God gives is amazing. you think about something and think 'i could never do that' but then you're in that situation and you somehow find the strength to do things you never thought possible - you work through your OWN pain. as i walked through the childrens NICU ... i had to fight the tears. to see all these infants, in their own hospital rooms, alone, crying ... broke my heart =( i just wanted to go in the rooms and pick them up and love on them, kiss their faces and tell them everything was going to be alright.
but anyway - back to miss gianna - she is beautiful :) i am SO thankful that i got to see her ... i could have just stood there forever and gawked at her! 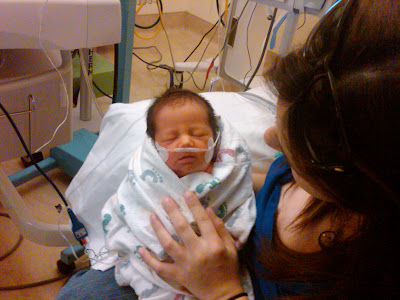