It's Coming: Disney on Ice!

The best part about Summer ending in the Poag household is the fun shows that come to our local area! It's something my boys look forward too every season! Our first show is Disney on Ice presents Follow Your Heart!

Tickets are on sale now!

Disney On Ice presents Follow Your Heart is bringing Disney•Pixar’s record-breaking animated feature Finding Dory to the ice for the first time in this live production produced by Feld Entertainment. The ice-skating extravaganza featuring Disney•Pixar’s Inside Out, Disney’s Frozen and other beloved Disney stories visits EagleBank Arena in Fairfax, VA on October 19 – 23, for 9 performances. Tickets are on sale now.

Just keep swimming with Dory, Nemo, Marlin and new pal Hank from Disney•Pixar’s Finding Dory as they embark on a life-changing excursion to find her parents and discover the true meaning of family. Cheer with the Emotions from Disney•Pixar’s Inside Out –Joy, Sadness, Anger, Fear and Disgust– as they help Riley find the confidence to win the hockey championship and experience the emotional rollercoaster of growing up. Venture to wintery world of Arendelle where Olaf and Kristoff help reunite royal sisters Anna and Elsa from Disney’s Frozen and learn love is the most powerful magic of all. See Cinderella, Rapunzel, Tiana and the Disney Princesses make their dreams come true through their virtues of bravery, kindness and perseverance. And celebrate true friendship with Buzz Lightyear, Woody and The Toy Story gang. Make unforgettable memories with Mickey, Minnie and all your Disney friends when Disney On Ice presents Follow Your Heart skates into Fairfax, VA!
There’s something for everyone in a show that features 60 characters. The wintery world of Arendelle sets the stage for Olaf and Kristoff as they help reunite royal sisters Anna and Elsa and learn love is the most powerful magic of all. Audiences will celebrate friendship with Buzz Lightyear, Woody, Jessie and more pals from Disney•Pixar’s Toy Story. With Mickey Mouse and Minnie Mouse leading the way, this new Disney On Ice production will excite and amaze fans of all ages.

Date and Time of Performances: 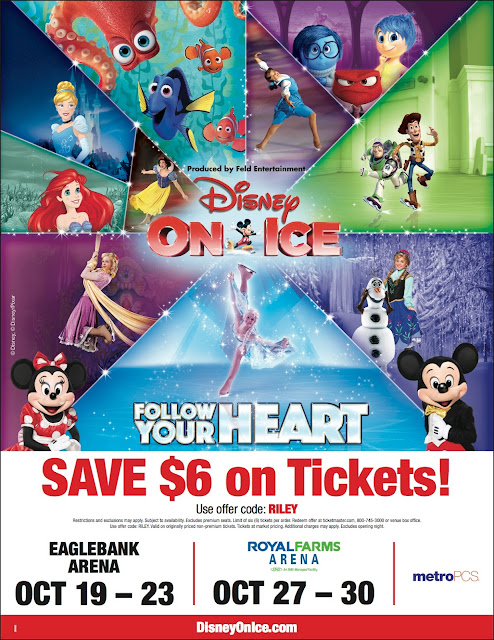 Use offer code: RILEY to save $6 on tickets!
and stay tuned to my blog for a 4 pack giveaway for OPENING NIGHT!