Ripley's Believe It or Not! [Baltimore, MD]

Believe It or Not!, Ripley's is now located at the Baltimore Inner Harbor. Come see over 15,000 square feet of the odd and weird world of Ripley's Believe It or Not! where truth is stranger than fiction. See a real shrunken head, Hogwarts Castle made of matchsticks and much much more! Along with incredible artifacts and artwork from all around the world and over 100 "interactives" take a ride on our 4D Moving Theatre and get lost in our Marvelous Mirror Maze. You can also take home your very own wax hand that you create. Ripley's has been proudly freaking out families for over 90 years. Why just say it, See it! 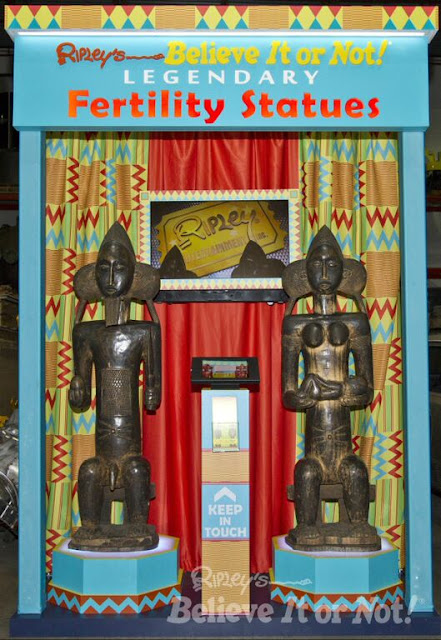 Oh Baby! Ripley's Believe It or Not! Fertility Statues to Go on Display at Ripley's Baltimore Odditorium - Hundreds of women believe that simply touching the statues helped them get pregnantIf you believe, you may conceive. That's the belief of thousands of women who have touched the Ripley's Believe It or Not! Legendary Fertility Statues. The statues will be on display in Ripley's Baltimore Odditorium starting Friday, June 19 and can be seen - and touched - for several months, free of charge. Baltimore is the first stop on the fourth world tour of the Legendary Fertility Statues.The history of the statuesThe statues were hand-carved by the Baule, who live in CÃÂ´te d'Ivoire (Ivory Coast) in West Africa, and probably date back to the 1930s. Ripley's acquired them in 1993 and put them in the lobby of the company headquarters in Orlando. Within months, 13 women, including staffers and office visitors, were pregnant.Following a December 1995 story in the Wall Street Journal chronicling the phenomenon, the demand to touch the statues became international news. In the ensuing years, the statues made three trips around the world. Women routinely made special visits just to touch them. Some who couldn't make it in person faxed copies of their handprints to employees, asking them to rub the handprints on the statues. Hundreds of women reported that they became pregnant shortly after touching the wooden statues, even those who had been told by doctors they would never be able to conceive. Some are very serious about touching the statues, believing in their powers to help them conceive. Others want to avoid touching the statues - for the very same reason!How to touch the statues in BaltimoreThe statues will be on display in the lobby of Ripley's Believe It or Not! Baltimore Odditorium during regular business hours, Monday-Thursday from 10 am - 9 pm; Friday-Saturday from 10 am - 10 pm, and Sunday from 10 am - 8 pm. There is no charge to see the statues, but tickets will be required for visitors who wish to tour the Odditorium.