it's been quite a while since i sat down at the computer and actually blogged about something relative to my life. i used to blog quite often... granted, i sat at a desk for 8hours so being on the computer was EASY. and even though i spent majority of my days alone, i always had something to blog about. now, my days are filled with all sorts of things to blog about yet i rarely do. it's hard to squeeze out time to go sit down at the computer and clear my thoughts [ex: not having a kid need something, not having laundry to fold, not having a mess to clean ... ] and type words that create a real sentence!

anyway, it's time.
so, what's been going on in the poag world! even though the typical answer is "not much" ... i guess there are plenty of things to share!

Bear:
is getting SO BIG! hard to believe he's a year and a half already! like his brothers, he's ornery but very sweet and FUNNY. hard to imagine someone who barely speaks can be funny, but i find myself laughing all day with him! he's starting shaking his head no every time i ask for a kiss - all while laughing. he knows what he's doing. he recently went through a phase where he was scared of his monitor. i mean, SCARED. he would cry and shake anytime we went into his room [which is very unlike him]. finally, after pulling out the ol' light/music projector - things have been okay. but he needs his 'fishies' each night! [the light projector displays fish on the ceiling!]. he loves to play with his brothers and climb all over anything and everybody! his vocabulary is improving by the day and his favorite thing to say lately is "what's this". He also likes pointing everyone out and saying their name. now that my dad is here, "pop pop" is a favorite as well. 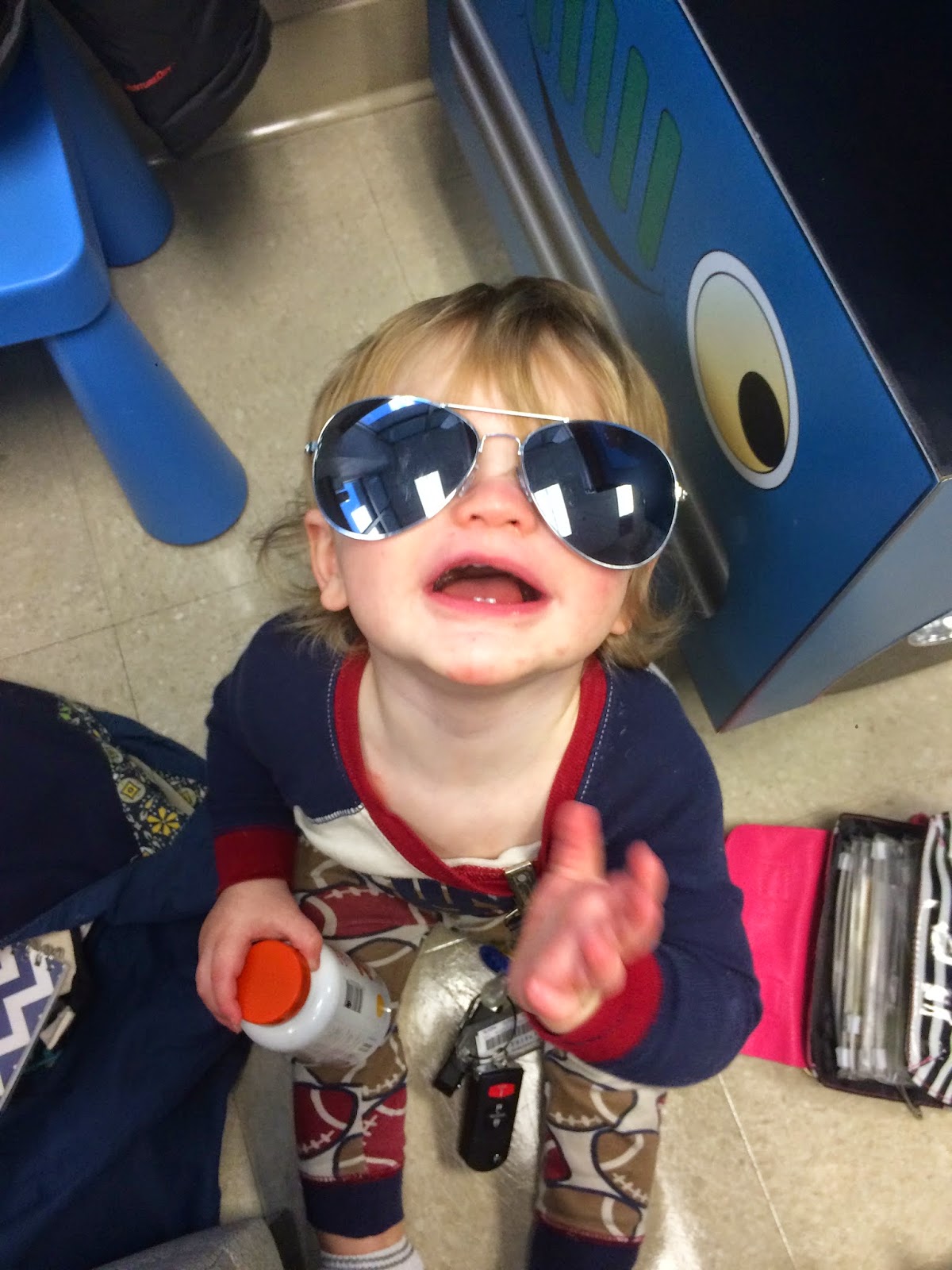 Rhys:
no big updates with him. he's still crazy as ever. has a better vocabulary than me! likes to say things like "this is incredible" or "it's such a lovely day". he's the biggest mama's boy i've ever seen and has a hard time being left alone. he used to be so independent so it's a change for him. he loves to play outside and with his big bro. he also loves being a big brother to bear. we're working on writing his alphabet these days which can be a struggle because he is very strong-willed and if he doesn't want to do something ... there's no changing that! he talks about his 'friends' all day long and how much he loves them and who is his current BFF [and yes, he says things like BFF or OMG]. he's a comedy show .. that's for sure.
he's obsessed with mashems and blind bags [things he discovered on youtube via his nabi!]. anytime someone comes over or we go somewhere - he always asks for one! he loves being surprised i suppose! 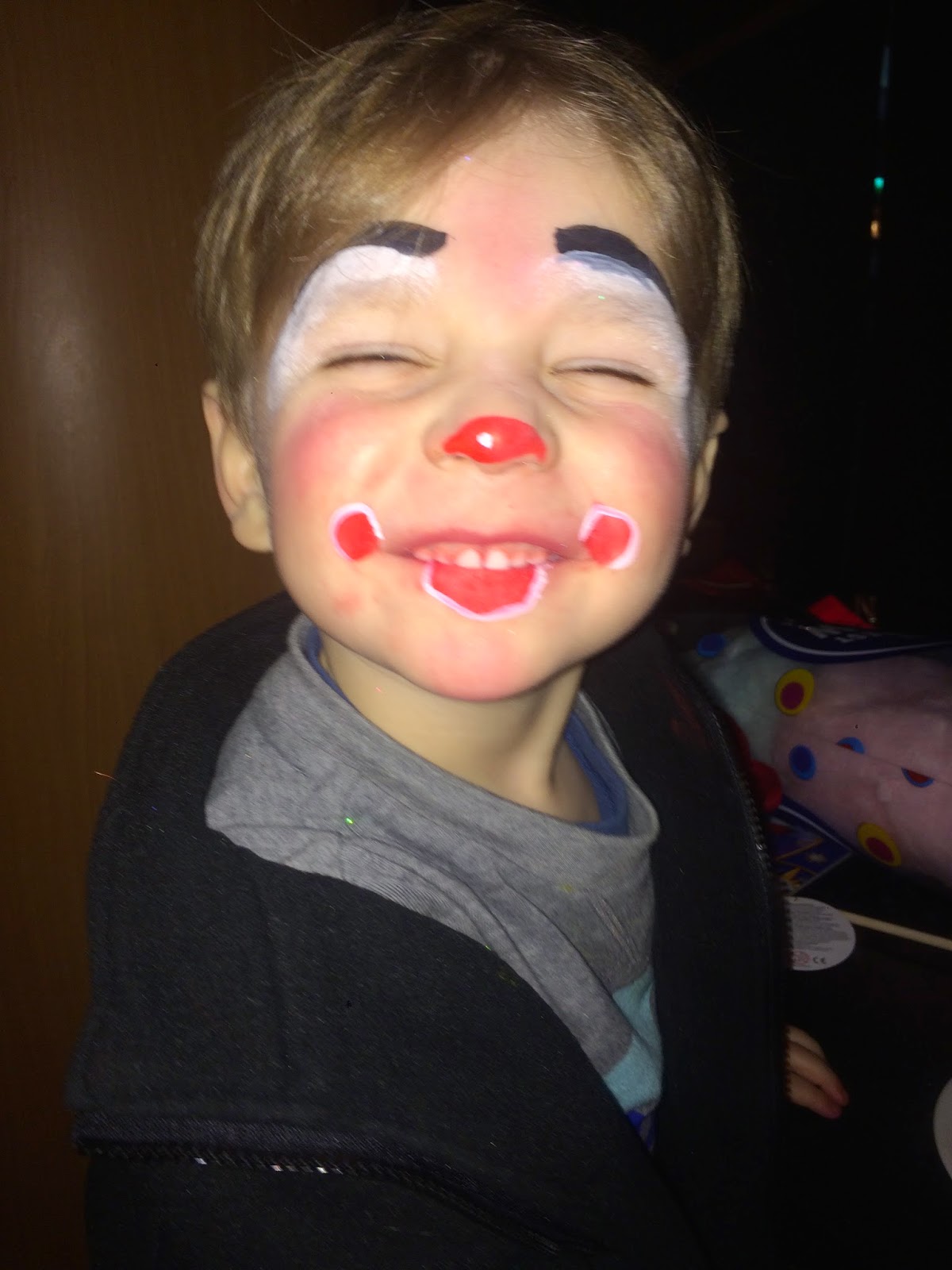 Kullen:
doing great in Kindergarten! He knows all his sight words and is doing really well at reading. he tries to sound out words that he doesn't know and it makes me laugh the way he sounds out each letter! but, happy that he's trying and into it.
he's started up t ball again and really enjoys it. adam and i are his coach so i think he also enjoys the solo time with just us! he's doing really well so far and has improved not only in his swing but also his throws. it's awesome to see!
he hasn't lost any teeth yet but checks them daily. i think he's really ready to lose one! he talks about his friends at school all the time. i think he's like me in that aspect - enjoys having friends and holds them dear to his sweet little heart. he can be very ornery and has an awful attitude sometime, but he really has a good heart. he's my sweetest boy. 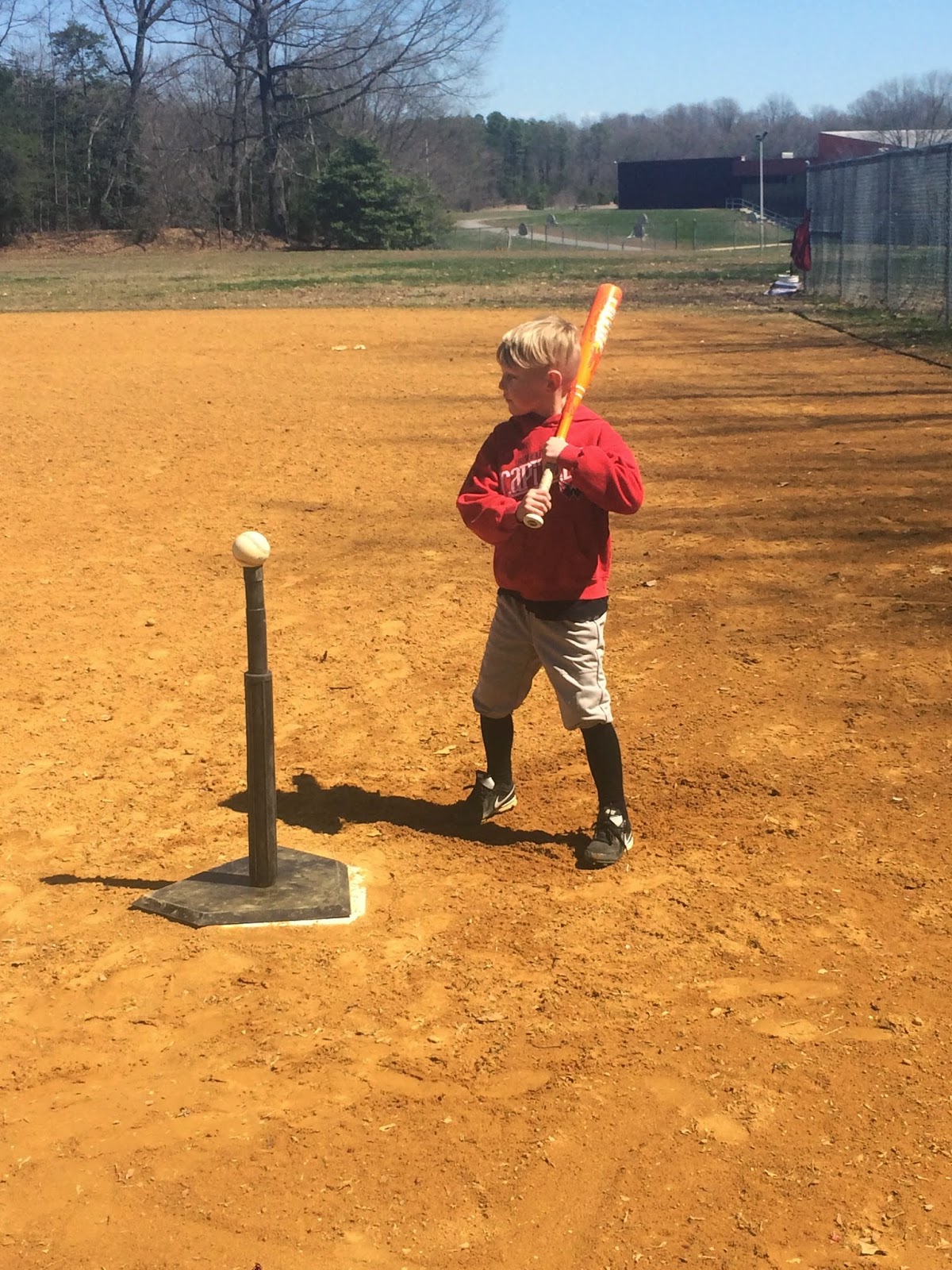 Adam:
maybe we should start with injuries! ha! seems like it's always something with him! he hurt his pinky last year during softball and let it heal on it's own and apparently healed wrong and now needs surgery to correct it. then, a few weekends ago during a softball tournament he sprained his knee! he's still limping on it! despite all that, his about to start his mens league on monday nights! crazy man!
aside from that - things about the same with him! work/gym/home! 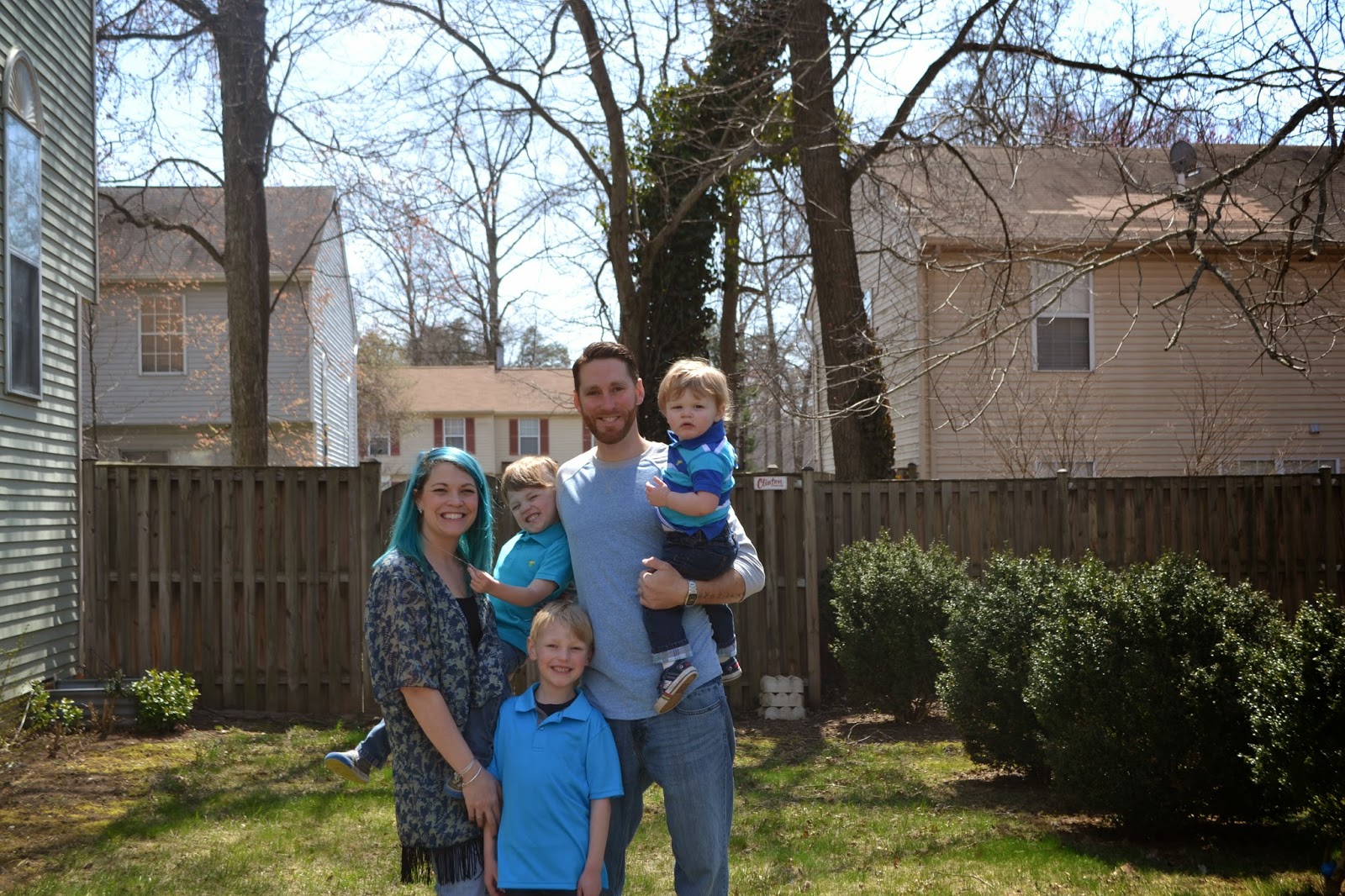 Kaley:
is about to start working! nothing crazy .. just serving at a local seafood restaurant a few nights a week. i've never served before so i'm quite nervous but willing to give it a try! i could really use the extra money this summer [to do fun things with the kids and do some things for myself - like get new contacts, get pedicures, buy a new laptop, maybe pay for a personal trainer! HAHA] we'll see how it goes!
another big update for me is that i've lost over 20lbs! i'm currently AT my goal weight but would like to lose more! ideally, i just want to tone my stomach area because that's my biggest issue. off the scale though, i've started noticing a difference in the way my clothes fit and look.  it's really an awesome feeling. i have a loooonnnggg way to go but i'm happy!
also - i had blue hair! i've always been open to crazy things with my hair but i believe this was by far the craziest thing i've done. it was awesome. i would have loved to keep it longer but ... ya know. ::adult things!:: 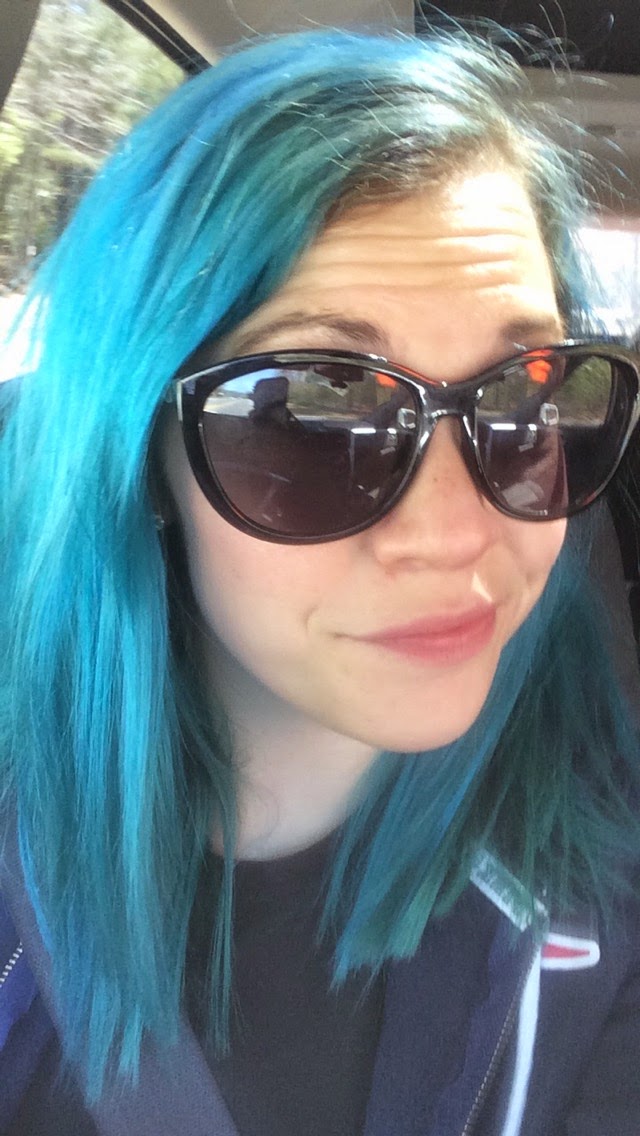 in other big poag news ... we have a new member int he house. POP POP ... aka: my dad! circumstances brought him to maryland so he's been staying at our house while we saves enough for his own place. while it's always challenging having someone in your house for an extended period of time ... my kids LOVE having their pop pop here. none of my kids even really SAID "pop pop" until they were older because we only saw him a few times a year, but it's a predominate word in bears vocabulary these days ... and i love it. he loves his pop pop :) i'm excited for my kids to have another grandparent close to them! 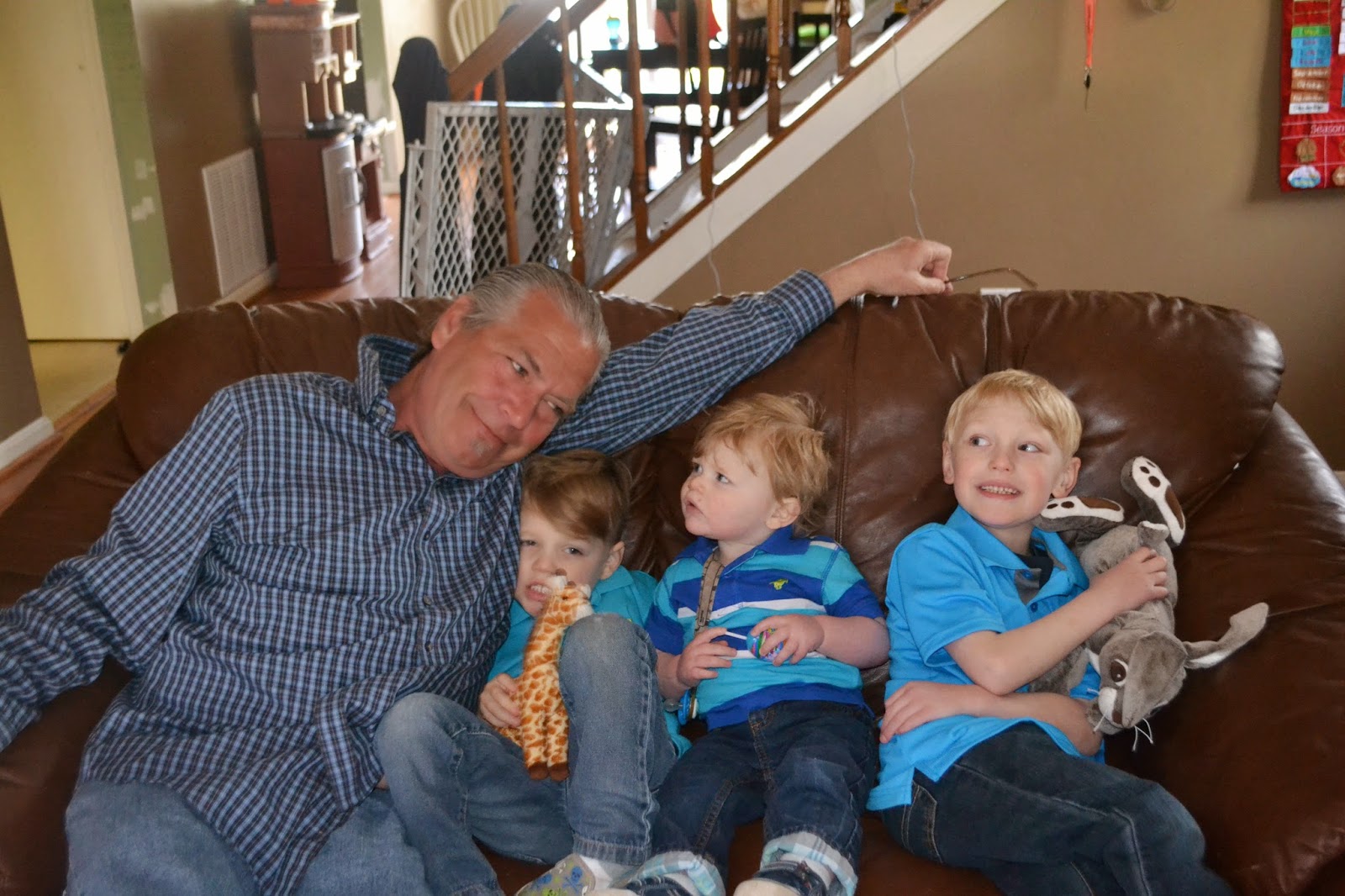 anyway ... so thats mostly what's going on around these parts!
how've things been with you, friends??

My Tummy design and create beautiful maternity and breastfeeding clothing in Europe. They're on trend and are great for going out or wearing as maternity wear. Some of the tops have designs on the bump which is so sweet, and the stretchy fabrics mean the clothes can be worn throughout pregnancy without worrying they'll get too tight. The new summer collection features pregnancy trousers, tops and breastfeeding dresses too.