i intended on getting this done BEFORE the new year hit but lets face it, i wouldn't be me if i wasn't behind! ;]  i wanted to do a little recap of this last year because despite a few negatives, it was an overall great year. i have a bloggy plan for twenty eleven to help me remember the year in better detail, so stay tuned for that! =D


﻿
we kicked off 2010 at home, enjoying the company of each other! our little 6 month old stayed up until midnight and was able to give his mama and dada new years kisses &lt;3 january was spent watching our boy sit up on his own and develop into a happy little baby! kullen learned how to hold his bottle all by himself in january - something mama was VERY happy about! we also had a visit from my dad [papagoob], his girlfriend, her daughter and her daughters son michael! kullen and michael were born 2 weeks apart and always hang out whenever we can get them together! 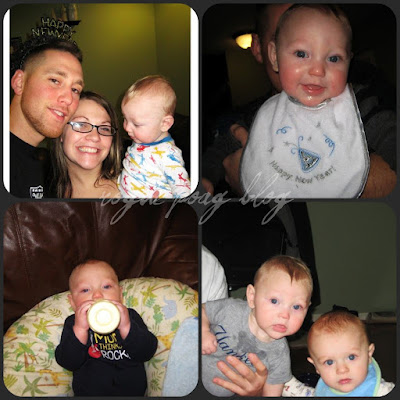 ﻿feburary was a fun month! kullen got his two bottom teeth, finally :) we also had a HUGE blizzard that snowed us in for a week! i don't even remember what our final inch count was but on my facebook i have a mobile upload of my tape measure in the snow measuring 14 inches and the caption says 'still coming down'. we probably got close to 2 feet that month! PHEW! a few other milestones for little man included stepping into the world of baby food! :) he tried them all and liked most! ;] he also got his very first toothbrush since hims finally had teefers! 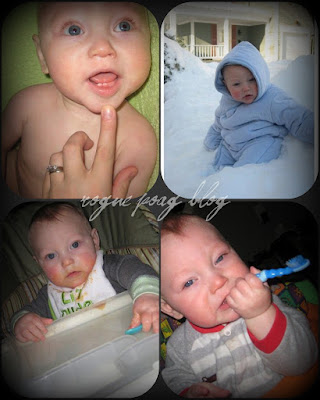 ﻿march was a fun month! and by fun - i mean messy! you may remember the messy march themed posts? they don't need much explanation! kullen moved to a lot more solids and had fun trying and exploring all new foods and tastes! i had fun photographing him as well ;] 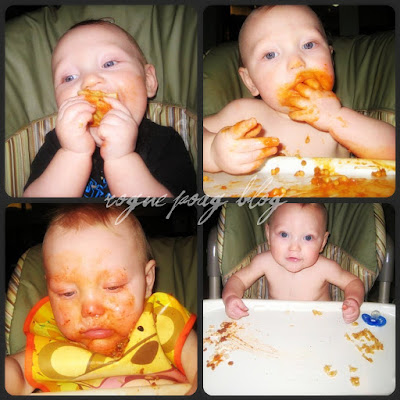 oh, april! what an exciting month! firstly - mama got her new camera! =D which made for TONS of pictures! we also began swim class which kullen absolutely LOVED! some of his little  friends were in class with him which made it all the more fun! we also went to the circus during april. kullen was totally intrigued by the lights and circusy things! we also made a trip to connecticut for easter to spend time with papagoob and nana&grandy! we dedicated kullen to the Lord that weekend as well. later in the month, we got to see papagoob again when we came down for a visit! after he left, kullen had his first trip to the ER. he spiked a high fever the day my dad left and began shivering/shaking. turns out he had an ear infection and a few days later his two top teeth made an appearance but us newbie parents were a little panicky and didn't want to take any chances! 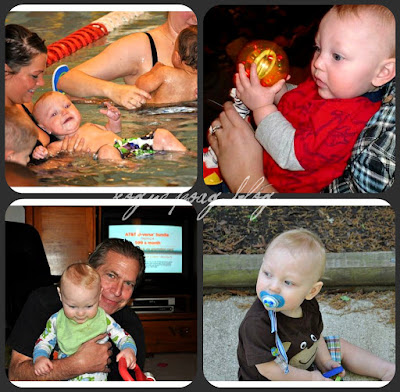 we spent a lot of time outside in May!
we began giving kullen a sippy cup more often than not because we knew we'd be taking that bottle the day he turned one! he took to the sippy the first time he had it - which was a blessing for us! kullen also began to pull up and stand [assisted] a lot this month. he was ready to walk/go but didn't quite have the means just yet! we also kept experimenting with foods and gave him his first peanut butter and jelly sandwich during may! no peanut allergies, thank God! we did a lot of prepping for kullen's first birthday and vacation which were the next month! 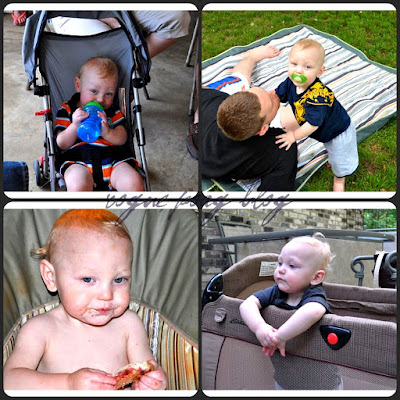 JUNE!!!! =D the BIG month! kullen turned ONE! but before that happened - we went to myrtle beach for the week! we already knew it but kullen proved our 'water baby' theory right. the kid LOVES the water. he could have spent the entire WEEK down in the water! while we were there, he stood up ON HIS OWN! we knew walking would be only a matter of days! and sure enough - the night before his first birthday - he took his first step :) also as you can see - he got a few more teeth ;) we had a blast on kullen's first birthday surrounded by all our family and friends who spoiled little man to death! 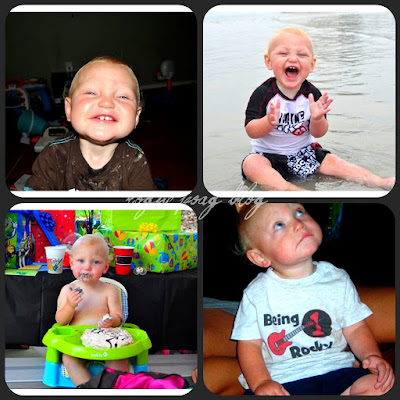 july was a great month! we spent a lot of days at the pool in our neighborhood! kullen and mama are fishes, that's for sure! ;] for 4th of july weekend, we went with a friend of ours to his family's lake house! we had a blast with everyone! and kullen loves his little kid friends =) adam and i got to spend some time with our friends at aquapalooza, concerts and girls nights out! 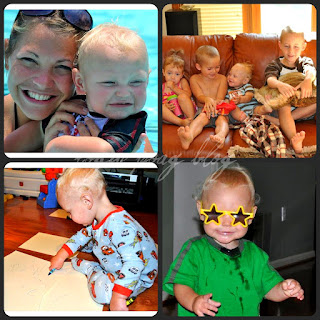 it seems most of our evenings were spent at the park in August! kullen absolutely LOVES the swings and since he was walking, he had fun just checking everything out! we made our way to connecticut for a weekend again this month and had a blast with the family! kullen and michael got to hang out and we got to meet michael's sister madison for the first time! i also got my tattoo for kullen in August and absolutely love it ♥ 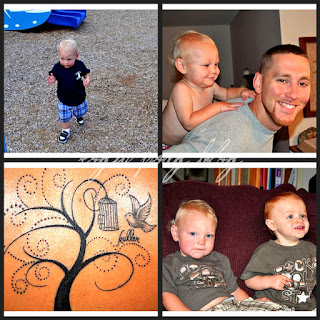 september was a busy month!!
amongst birthday parties and mygym - we managed to squeeze a lot of other activities into our schedule! we took kullen for a picnic with his bud, dominic, and i got some great shots of the boys! kullen found that he loves baths just as much as the pool - even with bubbles! we took him to his first baseball game! we also took him to the local fair and he rode a few rides for the first time! he liked most of them but wasn't a huge fan of the carousel after a few times around! i dont blame him! ;] 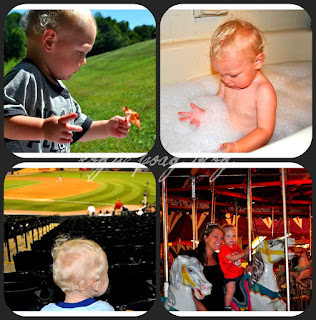 october is my birthday month! i turned 26, wah! we also went to the Renaissance festival and kullen had his first turkey leg - and LOVED it! and of course halloween was in october and our little dragonman had a blast - as did me and adam! :) we also took kullen to cirque de solei and he absolutely LOVED it. he sat still in my lap the entire time and would occasionally look up at me in wonderment! 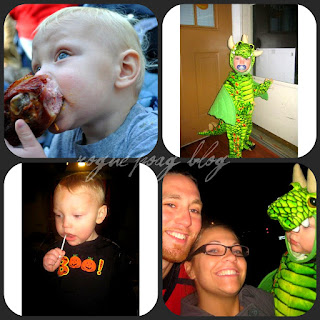 the big event in november was obviously thanksgiving! we packed up and roadtripped to CT as usual. this thanksgiving was a little extra special because my younger cousins amanda gave birth to a PRECIOUS daughter addison a few days prior to us arriving! we all took turns loving on her and then unwillingly giving her back to her mama! ;] 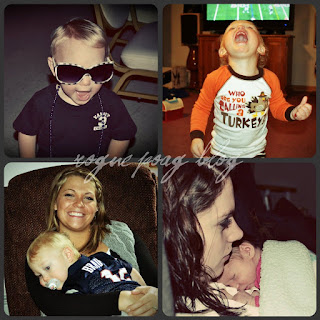 and here we come to the end of twenty ten! first and foremost - we took kullen to his FIRST caps game and boyyyyy, he loved it! =D we can't waiiiiit to take him back now that he's perfected the chant of 'LETS GO CAPS!'. we also went to ICE! down at the national harbor! this years theme was the Grinch - perfect! he's my favorite christmas character! unfortunately the day after we went, kullen came down with a sickness that would put us both out for an entire week! we heard ear infection, pneumonia and then finally RSV. basically the kid had an extremely high fever for a week that no antibodies would cure! the crud finally ran it's course and after a week my little hammie was feeling better! and then it was CHRISTMAS! that week really put me behind but we managed to make it through the holiday's without issues! =D kullen was spoiled - as were adam and i :) 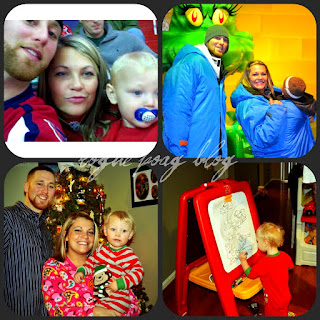 twenty ten was ultimately a fantastic year for us! this entire recap was from memory so i KNOW that i missed some things. next year will be different, i guarantee!
the poag's look forward to everything twenty eleven holds for us and our dear family and friends ♥
﻿

I love this kales!! Im working on the same post but im a little slower at this whole blog thing haha