only 'a day late and a dollar short' right?! i'm always behind, ugh! regardless, as you all know, kullen hit ELEVEN months yesterday. -tear- my boy is growing up!! i thought i'd do a little post about what my boy is doing at 11months! it should be interesting to see what, if any, he is doing more of or differently in a month from now!

so, we'll start on our daily events - one in which i spend with kullen and not stuck at a desk, an hour away from him. since i stayed home with kullen yesterday, i will use that as our prime example! :)

5:15 - kullen woke up - IN HIS CRIB - and i went to get him. picked him up and he snuggled right on my shoulder and went back to sleep. since adam was already gone, i put him in bed with me and we both went right back to sleep!
7:45 - i woke up to a smiley boy in my face, crawling all around!
8:00 - diaper change and cartoons! :)
8:15 - 4oz bottle
8:30-11:30 - play time. (yesterday we had photoshoot time on top of playing!) our play time includes playing with toys, peek-a-boo, patty cake, letting him crawl/walk all around - all while watching blues clues, sesame street and/or baby einstein.
11:30 - 6oz bottle
12:00 - lunch for mama, kullen nippled as well.
1:30 - nap time. typically, he would nap for longer but we were out and he only napped for roughly 30 minutes. - now nap time varies for him, stephanie could probably chime in more on this one ... somedays he'll take a 2hr nap while others he'll nap for 30mins-1hr. finicky child!
3:00 - 6oz bottle
3:15-6:30 - play time again! part of this play time usually consists of kullen banging on pots and pans in the kitchen while i'm working on dinner! :)
6:30-7:30 - eating dinner with us - immediately followed by bathtime. i did an hour time block because the times vary but usually by 7:30 - he has eaten dinner, been bathed and in PJS.
7:30-7:45 - last bottle of the night 6oz w/ cereal. typically he falls alseep while or right after he finished his bottle.

now lately, between 5-6ish - he has been extremely fussy. i think some of the fussines is due to more teeth coming in, but i know for a fact its because he is tired. i have been keeping him awake in the evenings versus letting him take a nap because otherwise - he is up until 10 - and that just makes me AND him a GRUMP the next morning! haha

fun things -
kullen is now giving high-fives on demand :)
kullen is a dancer!!!! anytime music comes on, and sometimes when there isn't even any music - he is dancing. his dance consists of holding on to something and bouncing! but, he gets real excited about it so he has a big cheese on his face the whole time! :)
kullen can clap on demand (when he's in the mood) - sometimes if someone on the TV claps - he will look at me and clap as if he's saying 'i can do it too ma!' haha!
kullen says a few words - mama, dada, ninny, baba, and the newest is 'more' its REALLLLLLY cute when you hear him say it - which is rare but cute, none the less.
kullen is a moving-man! he 'walks' allllll around, as long as he has something to hold on too :) he loves to reach for things (like the oven handle) and pull himself up to stand. he won't stand alone though! he has stood on his own for about 5 seconds before realizing he doesn't have anything to hold onto and immediately falls to his butt! anytime you try to hold him up and walk with him (like he used to LOVE to do) he would much rather drop to his butt and crawl away. he is REALLY quick with the crawling!
kullen loves to share - well, when he's in the right mood. he will share his food with you and most of all, his ninny! sometimes he will just crawl/walk over to me and hold his ninny out for me to take! :) cute!!!
kullen can give kisses - but beware - they are open-mouthed, slobbery kisses! :) he doesn't know it by the word 'kiss' though - or at least i don't think he does - but if i go 'muuuuuu-ah' he will lean in and give me one! :)
kullen LOVES peek-a-boo and now that his legs are stronger - he loves to do it from his crib. he loves to bend down and hide and then POP up and giggle when we say 'peek-a-boo'!

he really is a funny kid. he makes me and adam laugh like we've never laughed before. :) i can't wait to see what is in store for the next month!

i took this picture of him yesterday, during our 'photoshoot' :) it makes me grin! :) 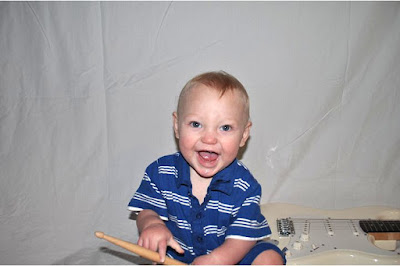 Super cute post! You had me LOLing at my desk with this one- "12:00 - lunch for mama, kullen nippled as well." Did Kullen nipple or nibble? bahaha or did mama nipple?

Ok thanks for the workday entertainment ;)

Loved your cute post of our super-boy. Can't wait to see him in a few weeks.

So I will agree with naps...some days there's just TOO Much going on to sleep...that would be MUCH too boring, haha!! I swear he's afraid he's going to miss something!! LOL! He will take his bottle and lay down and be quiet as a mouse and then POP his head up and yell like hey wait for meeeee guysss, I was just taking a break!!ahaha Your kid is hilarious. Oh and he sings for you too now. He was almost asleep and I just hear a faint little maaamaaa, maaaamaaa song coming from the pack n play ;) Never got up once, must have thought of you and gone to sleep. Sweetest thing EVER. <3

On the topic of naps...so i dont forget! haha
He was a good little napper today and slept for 1 1/2 hours but fell asleep at noon! I was so surprised and remembered when the kids hit 12 o'clock naps, life was GRAND ;) They can sleep long enough to rejuvenate themselves for the afternoon and still be tired by bed time. Noon naps rock!! :)

awwwww <3 singing maaama, maaamaaa <3 i am cheesing. he has been saying mama a lot more lately! :)